By Jim Worsley
February 3, 2021
Sign in to view read count 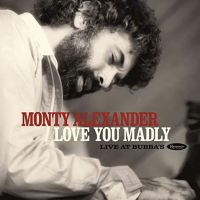 Risk and reward is honored in the selection of this premium sound night club gig from nearly forty years ago. Just how such a recording is going to play in a current climate is tricky business. Is it vintage or is it outdated? Is it a fond remembrance or better left forgotten? The answers are of course in the ear of the beholder. Certainly, the spirit and energy play well in any time period.

Jamaican born pianist Monty Alexander first made an impression on the jazz circuit as far back as the early to mid-nineteen sixties. While he didn't fully embrace his Jamaican roots until years later, there was always a certain swagger in his lines. He perhaps held that back a bit until he was more firmly entrenched as an artist. At any rate, by nineteen eighty-two, the year this was recorded, Alexander had begun to incorporate it into his swing. It occurs that being in the transitional development and growth stages of what is now his widely known jazz and Jamaican fusion, is key to the freshness and improvisational nature of the performance. Indeed percussionist Robert Thomas Jr. is brought in to infuse his hand drumming with bassist Paul Berner and drummer Duffy Jackson.

"Arthur's Theme" was a very popular song at the time. The tune from the movie Arthur(Warner Brothers, 1981) is given quite the jazz makeover and won the audience over in a heartbeat. The Duke Ellington composition, and title track, follows, and an evening of live jazz quartet music is underway at Bubba's Jazz Restaurant in Ft. Lauderdale, Florida. What was most striking about the next few tunes that completed the first set is Alexander's remarkable proficiently in shifting tempo, Jackson and Berner had an opportunity to stretch out during "Reggae Later," before stretching during the break. Berner noteworthy in his Ron Carterish grooves and sounds.

"Blues for Edith" set the mood for the second set with a bluesy feel. But one that seamlessly built into a briskly paced number. They sailed on into "Fungii Mama," and the house lit up. Alexander then took the risk of dropping way down into a slow and earnest melody. He was rewarded when "Consider" had the crowd in total silence, not wanting to miss a single note of the Alexander penned ballad. Unlike the first set when the tempo changes during songs were notable, this time it was the sequencing that was the ticket. "Montevideo" seemed to blast off like a spaceship coming off such a now quiet space. The orbit continued to soar with an impressive and charismatic vision of "Body and Soul." Alexander and company then proceeded to burn the house down in a "Swamp Fire." The Milt Jackson written "SKJ" closed the show amid band introductions and zealous fan appreciation.

It is cliché to say that this record is a must for any Monty Alexander fan to add to their collection. It is, at the very least, of no risk and high reward.