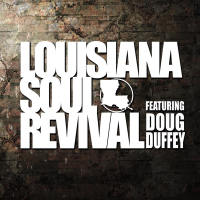 Louisiana Soul Revival (LSR) frontman and primary composer Doug Duffey—already enshrined in the Louisiana Hall of Fame (in 2001) and the National Blues Hall of Fame (2009)—sure knows his musical roots. "North Louisiana, in the Mississippi Delta, has deep musical roots in the blues, Memphis soul, southern gospel, rock 'n' roll, folk, and hybrids that are uniquely its own," Duffey explains.

This eponymous debut gives voice to Duffey's extensive repertoire of funky, soulful originals primarily written between the 1970s and '90s. For example, its irresistible opener "Funky Bidneh" and "Be What R Ya" were written around the same time that Duffey was working through the iconic "One Nation, Under a Groove" with Parliament Funkadelic . (Other funkmeisters who have recorded Duffey tunes include George Clinton and Rare Earth.)

To steal and slightly twist the title of a famous Jay Geils Band tune: This set ain't nothing but a party, and sounds like a lost gem discovered midway between the Albert King blues and Bar-Kays funk-rock titles in the classic Stax-Volt label catalog. Guitarist (and arranger and producer) Dan Sumner opens "Funky Bidneh" with rhythm licks that feel like an instrumental puppy wriggling to get out of your hugging grasp; alto saxophonist Mason Howard solos with the early rock raunch of New Orleans' famous Specialty Records and Sumner's solo shows off his major-league fastball—high, hard and nasty. Duffey's tightly wound three-minute nugget "1-900-For-Love" would have been a great tune for Little Milton or Z.Z. Hill to sing.

"It Ain't What Ya Do" keeps the rhythm rocking back and forth, a funky see-saw for your ears to jump on, while Duffey's vocal overflows with authentic southern soul: A little bit country, a little bit funky, a little bit rockin' but all the way soulful. "There's a real tangible difference that you can hear in Louisiana's music. It's more rhythmically intricate," Sumner suggests. "In Louisiana, music is uniquely rhythmic across all styles."

It's also uniquely rhythmic across genders: Betsy Lowe and Naomi Holder shimmy and stomp through the lead and backing vocals of "Do It Right" (which Duffey originally wrote for The Brides of Funkenstein). These female vocals may introduce a new sound, but the music behind them remains a rolling and tumbling caldron of steaming funk. "We have energy coming from lots of different places in life," Sumner concludes. "It's a big, blasting full sound. It's a big gumbo."