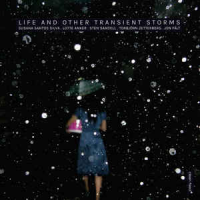 Portuguese trumpeter Susana Santos Silva has become increasingly prominent on the European scene. When she was invited to put together a band for the 2015 Tampere Jazz Happening in Finland, she came up with the talented cast showcased here. Swedish bassist Torbjorn Zetterberg has worked with her before on Amost Tomorrow (Clean Feed, 2013) and If Nothing Else (Clean Feed, 2016), but the trio of Danish saxophonist Lotte Anker, and Swedish pairing of pianist Sten Sandell and drummer Jon Fält were all new acquaintances. They combine on two collective inventions which bear testament to the fast thinking and instrumental prowess of the assembled crew.

Even though the instrumentation might suggest a conventional jazz quintet, the interaction here takes place between equals. Both pieces teeter back and forth across the boundary between free jazz and free improv, informed by close listening and reaction. As the titles suggest, continual change predominates with an organic quality to the ebbs and flows. They create a dense tapestry, especially with everyone in full spate, when they build to sustained crescendo. But such forceful personalities easily cut through any murk when needed. Although largely pursued as a group music, both Silva and Zetterberg enjoy unaccompanied passages.

Silva and Anker work together well, and a lot of the time they phrase in tandem. Silva's tempers her textural exploration with airy trumpet and breathy, buzzy muted mutterings. Her attention to nuance and sound is best appreciated in her solo near the start of "Other Transient Storms," notable for her subtle variation and unobtrusive deployment of technique. Anker proves a formidable sparring partner deploying a keening, imploring feel, full-toned and incisive on soprano, while on tenor she overblows with such control that her fluty whistles and multiphonics edges effects evoke electronics.

An admirable ensemble player as well as an intriguing soloist, Sandell mixes jagged plink plonk, dampened notes, fast sparkling runs and abrupt accents into an unpredictable cocktail. Zetterberg rejoices in muscular pizzicato which anchors the date, and at times an almost subliminal resonant arco underpinning, while on drums Falt merges assorted percussive devices, bangs, taps and clangs into lurching momentum interspersed with sudden attacks. The volatile amalgam with Sandell keeps everyone on their toes, the listener included, and forms another of the pleasures of this splendid disc.