By MARC DAVIS
February 3, 2015
Sign in to view read count 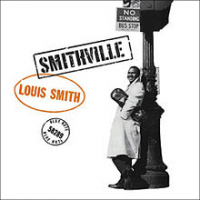 Sometimes, thumbing through the old Blue Note catalogue, you wish for something brand new. Something not the usual Jimmy Smith—Lee Morgan—Lou Donaldson—Horace Silver. And then you find it and wonder, "Who is this guy? And what ever happened to him?"

Louis Smith is that guy.

The trumpeter recorded exactly two Blue Note albums, one in 1957, one in 1958, and then disappeared for 20 years. After listening to the 1958 record, Smithville, I can only wonder why he retreated from the recording world so quickly.

This is a really good record. It's firmly in the Blue Note bop tradition. Smith sounds like a real disciple of Dizzy Gillespie and Fats Navarro. He keeps up on all the fast numbers, sounding fresh and fun. And he's especially good on the two slow cuts.

The highlight is the first song, "Smithville," written by Smith. It's an 11-minute slow, draggy blues that shows off Smith on trumpet, Charlie Rouse on sax and Sonny Clark on piano.

Rouse would go on to star with Thelonious Monk, and Clark would lead his own stellar Blue Note recordings. (One of his best albums, Cool Struttin', was recorded just two months before Smithville.) But this may be Smith's best effort ever. It certainly shows what great chops he had, and terrific musical taste, too, as a player and writer. If you like bop, there's no way you won't like this CD.

But it does make you wonder. What if Louis Smith had decided to keep on recording, and hadn't gone back to teaching? Would he have been the next big Blue Note trumpeter? Could he have competed with Clifford Brown and Lee Morgan and Freddie Hubbard? Based on Smithville and his debut album, Here Comes Louis Smith, I imagine Smith could have been a real been a star.

Sadly, we'll never know for sure.