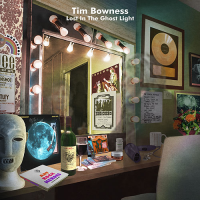 It's a somewhat hidden truth that a sizeable percentage of any musician's fan base believes that the music their favorite artists make is a direct reflection of their tastes. While an artist's music ought, indeed, be a reflection of what moves them, it's another truth that, more often than not, their listening habits run much farther afield.

One way to develop a more thorough appreciation for an artist's tastes, touchstones and influences is to look at their entire discography, assuming they've been around long enough to build one sizeable enough to tell a more complete tale. Still, even looking at discography that is now entering its fourth decade doesn't necessarily tell the whole story, as is the case with Tim Bowness.

Lost in the Ghost Light is Bowness' third solo release since 2014's Abandoned Dancehall Dreams (Inside Out)— his first "real" solo album despite releasing My Hotel Year in 2004, which Bowness describes, in the 2017 All About Jazz interview that accompanies this review, as ..."pieces from several separate projects I was working on in the early 2000s. It's a solo album in name mainly, though I did define its shape and sound,"

Lost in the Ghost Light shares certain unmistakable stylistic commonalities with the British singer, songwriter and multi-instrumentalist's previous two records, and his work in No-Man, Bowness' longstanding collaboration with fellow solo artist Steven Wilson that, on hiatus since 2008, may well be firing back up in the near-to-mid-range future. At the same time, it represents something completely different in Bowness' discography, whether it's solo, as co-leader of groups including No-Man, Henry Fool (along with Ghost Light compositional collaborator/keyboardist/guitarist Stephen Bennett) and his duo project with bassist/keyboardist Peter Chilvers, or as a guest with groups including Centrozoon, Opium Cartel and Darkroom and singer Judy Dyble.

Progressive rock—in particular the "softer side" of the genre that grew to massive popularity in the '70s before being hit hard by a number of factors towards the end of the decade and in the years since, until its unexpected resurgence of popularity over the past 15-20 years—has always been one of the undercurrents running beneath Bowness' music. That said, it's important to appreciate the true breadth and depth of his musical addiction, best expressed in his AAJ interview. Suffice to say that Bowness views music as a much larger continuum than any single genre, and is a fan of everything from the Moody Blues, Procol Harum, Simon and Garfunkel, The Beatles and Frank Sinatra to Randy Newman, Joni Mitchell and Leonard Cohen...not to mention a passion for Kate Bush and David Bowie, XTC, John Foxx/Ultravox, David Sylvian, Japan and Joy Division, as well as American art-rockers including Talking Heads, Patti Smith, Lou Reed and Velvet Underground.

But amidst these diverse artists and stylists, progressive rock remains a major motivator because, as Bowness articulates in the interview: ..."contrary to its reputation as being distant, bloated and exhibitionist, for me the best progressive rock contains soaring imagination alongside rare emotional intensity. As much as my tastes have evolved over the years and my own music has developed along different paths, the idealism of progressive music remains a touchstone. Prog may have been occasionally ridiculous, pompous, and overreaching, but it was rarely boring."

If Abandoned Dancehall Dreams and its 2015 Inside Out follow-up, Stupid Things That Mean the World were superb records informed by progressive music, Lost in the Ghost Light is—not unlike his No-Man partner Steven Wilson's unexpectedly massively successful 2013 album The Raven That Refused to Sing (and Other Stories (Kscope)—unapologetically a flat-out progressive rock record, albeit one that could only come from Bowness' cooperative pen with Stephen Bennett. Relying more on soft melodies and cinematic atmospheres than The Raven's often overtly virtuosic, high- energy and high-octane music: Strawbs, early Phil Collins-era Genesis and Camel, then, rather than Yes, Mahavishnu Orchestra and King Crimson.

That's not to say there isn't any heat on Lost in the Ghost Light; the frenzied "Kill the Pain That's Killing You" is one of Bowness' most aggressive songs ever, from his processed vocals and fiery guitar work from Bruce Soord to the fierce rhythmic underpinning from Sanguine Hum drummer Andrew Booker and Burnt Belief/Porcupine Tree's Colin Edwin—the only other constant on the album along with Bennett...and a more fluid, intuitive and tasteful yet absolutely unshakable bassist you'd be hard- pressed to find.

The Pineapple Thief guitarist was chosen for this project because, as Bowness articulates, ..."he has a songwriter's approach to guitar solos in that he's direct and melodic. [Regular guitarist, Darkroom's] Michael Bearpark is great but he's from the abstract school of noise that includes David Torn and Neil Young. The Ghost Light songs needed something different."

But Soord isn't the only name guest to appear on Lost in the Ghost Light; amongst the many usual suspects who have populated solo albums and some No-Man releases in the past, Bowness recruited undervalued American progressive rock group Happy the Man's Kit Watkins for some evocative flute work on the opening "Worlds of Yesterday" and brief, Van der Graaf Generator-informed title track, while Jethro Tull founder, songwriter, guitarist and woodwind multi-instrumentalist Ian Anderson contributes a particularly moving flute solo on the closing, Novatron- driven ballad "Distant Summers," complete with unison vocalizing and occasional signature trills, as well as perfectly placed fills throughout.

Much of Ghost Light was co-written with Bennett, who brings a broader harmonic palette to the project. There are intentional nods to Genesis in the 12-string guitars and, most notably, in its reference to keyboardist Tony Banks' distinctive voicings on "Moonshot Manchild," where Bowness was thinking about "Genesis b-sides from the late 1970s and early 1980s[, that] had a chordal sophistication and exploratory shape that seemed absent from contemporary pop." Bennett's lush, orchestral support on the track—the album's second, and sharing certain thematic motifs with the opening, similarly image-inducing "Worlds of Yesterday"—are particularly wonderful for being played on the Novatron 400, a late-'70s renaming of the original tape-driven orchestra/choral sampler, the Mellotron, which in many ways defined the sound of progressive rock from its early days through recordings from the Moody Blues, King Crimson, Yes...and, of course, Genesis.

But it's not just soft symphonic leanings amidst acoustic and electric guitars that are at the heart of Lost in the Ghost Light's compositional treasures; amidst the album's eight tracks and 43-minute run-time there are hints of The Beatles, Pink Floyd and Peter Hammill...even slight tinged of Caravan and Camel...all subsumed within Bowness' increasingly distinctive writing style, which capitalizes on his work with No-Man and Henry Fool but expands his purview even further than ever before. Lost in the Ghost Light may be an unapologetically progressive rock record with its roots in music of the late 60s/early 70s, but it's also an unequivocally contemporary album.

While Ghost Light possesses a number of progressive rock (and some rock opera) signatures—in addition to the Novatron/Mellotron, there are vintage synthesizers, episodic compositions, recurring themes, irregular meters...and the flute, another popular instrument back in the day that has experienced a bit of a resurgence with contemporary groups including Britain's Big Big Train, Sweden's Änglagárd, Norway's White Willow and Italy's Höstsonaten—it still fits seamlessly within Bowness' broader discography, his melancholic ballads and sometimes wisp-like vocals a soft, dreamy constant.

Possessed, in turns, of pop-like elegance and more complex compositional and textural constructs, Lost in the Ghost Light may be a concept album like '70s releases including Yes' Tales from Topographic Oceans (Atlantic; reissued by Panegyric in 2016) and Genesis' The Lamb Lies Down on Broadway (Charisma, remixed/reissued by Rhino in 2008), but unlike those predecessors its story is not oblique (or completely incomprehensible). Instead, it's a very direct and personal story that may be about a fictitious band (Moonshot) and, in particular, its lead singer, Jeff Harrison—who is caught sitting in front of a mirror in his dressing room after a gig, looking back on a "life sentence" in music, for all its challenges and all its rewards—but it's as much a reflection on Bowness' own life in music, from questioning the relevance of a lifelong career as it enters its twilight years on "World of Yesterday" to "You'll Be the Silence," where Bowness' sums up Harrison's lot his most succinct best:

Still in his fifties, Bowness' career has yet to enter its final chapter, and his recent string of solo albums have proven amongst the most successful and critically acclaimed of his career. Clearly an artist who has plenty left to say—and one for whom the world still remains his—with Lost in the Ghost Light, Bowness has delivered another persuasive, evocative and provocative album that, with its more direct progressive tendencies and a group of perfectly chosen musicians—including a non-performing Steven Wilson, who mixed Lost in the Ghost Light (as he did Abandoned Dancehall Dreams) and mastered the album—has managed to raise his already top-level game.

As a concept album—and with Abandoned Dancehall Dreams and Stupid Things That Mean the World giving him plenty of additional material—Lost in the Ghost Light has the potential to become a terrific, full-length live show, so here's hoping that Bowness gets the chance to hit the road with some of the album's key players...perhaps, even, get out of Europe and aim for some North American dates: at this stage in his career as a solo artist, it's time. In the meantime, the thoroughly compelling Lost in the Ghost Light represents forward motion for Bowness even as it looks back, wistfully, at a time when, musically speaking, anything seemed possible...and everything was allowed.

Worlds Of Yesterday; Moonshot Manchild; Kill The Pain That's Killing You; Nowhere Good To Go; You'll Be The Silence; Lost In The Ghost Light; You Wanted To Be Seen; Distant Summers.