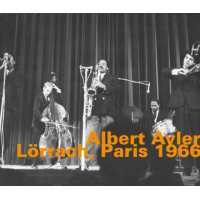 This is the third edition of the original pressing by hatOLOGY records, containing re-masters of tenor saxophonist Albert Ayler's live performances in Lorrach, Germany, and live tracks recorded at the Paris jazz festival, culled from his 1966 European tour. In the liners, Peter Niklas Wilson asserts that the George Wein produced the "Newport in Europe" tour and that Ayler was given second-class accommodations, contrasting what was tendered to the likes of Dave Brubeck and Stan Getz. But it's also noted that the Ayler band was revered like pop stars, as violinist William Folwell states that, "In Rotterdam, people stormed the stage." And it is well- known that Ayler had a difficult time reckoning with much adversity concerning free-jazz, but declared that his mode of execution was shaped with spirituality in mind.