By Friedrich Kunzmann
May 22, 2021
Sign in to view read count 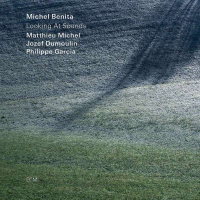 Michel Benita's leader-debut with his Ethics band for ECM, 2016's River Silver, came as a welcome addition to his oeuvre and the label's catalogue, following the French bassist's earlier characteristic contributions in saxophonist Andy Sheppard's Trio Libero on Trio Libero (ECM, 2012) and Surrounded By Sea (ECM, 2015). As on the first Ethics album, 2010's self-titled effort released on OutNote, on River Silver Benita unified an international pool of musicians, with Norwegian guitar-scape designer Eivind Aarset washing atmospheric clouds over organic ensemble interplay between Japanese Koto player Mieko Miyazaki and French flugelhorn romantic Matthieu Michel, as well as the flexible rhythm section made up of drummer Philippe Garcia and Benita himself. The two former outings had an eclectic notion in common, which illuminated world-music currents with jazz didactics. Benita's newest crack Looking At Sounds on the other hand sees the bassist's band going in a more popular direction of jazz meets fusion, swapping out Miyazaki and Aarset for Jozef Dumoulin on Fender Rhodes in rhythmically uplifting sketches that combine Miles Davis' fusion-era groove vocabulary with wistful melodicism and meticulously arranged sonic design.

Subtle drum percussion, most likely played with hands, not sticks, induces opening cut "Dervish Diva" with a calm yet steady current that spreads to the elusive Rhodes strokes, splashing across the arrangement like the gentle impact of stones skipping through water, leaving behind incessantly growing circles on the surface. Benita and Michel, the authors of the score, make up the two antipoles, tugging at each end of the spectrum with grounding plucking on the one side and soothing lyricism on the other. It's that same kind of balanced dispersion across the instruments and uncompromising rhythmic drive that emerges on several takes across the program, injecting tracks like "Body Language," "Islander" and the title cut with a cool draft that keeps the players on their feet.

Benita pays homage to late French harpist Kristen Noguès with "Berceuse/Gwell Talenn," expanding on an original melody penned by the influential French folk and jazz musician with elegant group interaction alternating between stop-and-go unison passages and more fluent sequences, seemingly stuck in a state of in-between, neither really here, nor there. The same ambiguity graces other explorations like the ambient "Cloud to Cloud," where Dumoulin's electronic experiments sonically channel his predecessor Eivand Aarset's atmospheric spirit. Elsewhere, Dumoulin demonstrates remarkable sensibility for his role within the group sound, laying down minimal but essential Fender Rhodes lines and chords that elegantly fill in the blanks where needed and leave spaces blank where they aren't needed.

Introverted cuts and more outward-engaged performances appear in equal measures on Michel Benita's Looking At Sounds, making this release not only one of the bassist's most steady and stringent albums to date, but also an album that can be regarded as representative of some of the main aspects for which ECM Records is known. The somewhat slicker acoustic-fusion layout looks good on Benita and makes for a tight collective sound that speaks to the respective strengths for each member in the quartet.