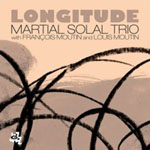 Oftentimes the best free players are those with a firm footing in the jazz tradition. Few have demonstrated as uncanny an ability to straddle the line between form and freedom as Martial Solal, a European pianist who has eluded his due credit in North America. Like the slightly younger Paul Bley, Solal has an ability to take the most well-worn standard and transform it into something new; oftentimes nearly unrecognizable but always engaging and playful. Solal may lean hard to the left but, like Bley, his wry sense of humor pervades most everything he does.

Longitude is far from a standards album—seven of the disc's ten tracks are belong to Solal. When he does tackle a chestnut like "The Last Time I Saw Paris," the pianist manages—in no small part thanks to the telepathic and sometimes downright unearthly rhythm team of twin brothers François (bass) and Louis (drums) Moutin—to make it elastic, with unexpected but somehow inevitable twists and turns. There's no denying the sense of swing that largely simmers underneath but occasionally surfaces briefly and more directly, but even when the Moutins are pushing a pulse, Solal seems curiously distanced and locked into it at the same time. And the brothers' natural empathy—exploited to equal effect on Moutin Reunion Quartet recordings like Sharp Turns (Blujazz, 2007)—results in a trio of uncommon chemistry.

Rarely breaking the five minute mark and often running less than four, Solal's writing is a combination of frightening complexity and open-ended spontaneity. Navigating the bumpy road of "Monostome" may be as much a challenge to hear as it is to play, but its "time, no changes" center, with the Moutin brothers swinging hard and fast, is a marvel of solo construction, as Solal blends fleet-fingered runs and occasional harmonized passages that act like punctuation marks between segments. Elsewhere, on "Navigation," the time appears more flexible, though when the trio comes together for a visceral groove, it's clear there's more going on compositionally than meets the eye.

The Moutins may be a generation or two younger than Solal, but they're no less versed in the tradition, with François quoting Charlie Parker's "Donna Lee" during his solo on the opening "Slightly Bluesy." With another death-defying theme to get through before opening up, Solal's solo is a unique confluence that's as free-flowing as it gets but remains somehow linked to the mainstream, if only by the thinnest of threads. And it's a mistake, really, to consider any feature for François Moutin a solo, as the interplay with his brother makes it more of a duet.

Solal may be approaching 81, but he plays with a freshness and vitality that's hard to resist. Longitude is an album filled with everything that makes the improvisational nature of jazz great, but with a complete lack of gravitas all the more infectious, despite its many inherent demands.