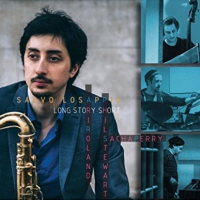 Although Long Story Short is an entirely appropriate title for Italian-born tenor saxophonist Salvo Losappio's debut CD as leader, as its playing time is a lean LP-like thirty-eight minutes, Rush Job might have been an even better one. Losappio's name and face adorn the front cover of the album, which names his four sidemen but does not disclose which instruments they play. That information is consigned to an accompanying press release. Song titles and running times are shown on the back cover. The jacket's inner space is blank except for a brief note about the time and place of the recording and who was responsible for the cover photo, design and layout, such as they are.

So much for cosmetics. As to the music, it is for the most part well-ordered and engaging. Losappio—who has studied with Grant Stewart, among others, since moving to New York City in 2015—is a stylistic and tonal throwback to the likes of Ben Webster, Chu Berry and Coleman Hawkins, albeit with a more-modern post-bop lexicon. Much of his repertoire stems from their era as well, with low-key yet cordial versions of Duke Ellington's "Sophisticated Lady," the standards "A Beautiful Friendship," "Avalon" and "Ghost of a Chance" (one of the late Zoot Sims' more favored numbers) complementing Charlie Parker's bop evergreen, "Shaw Nuff." Rounding out the program are Losappio's personable compositions "Boerum Hill" and "Leo for Two."

For the record, Losappio's teammates are pianist Sacha Perry, bassist Ari Roland and drummer Phil Stewart. They're sharp and reliable, even though, at times, Perry's piano is placed a tad too far forward in the mix; when one's ear is drawn from soloist to accompanist, it's a sure sign that something isn't quite on the mark. While Losappio and Perry claim much of the solo space, Roland inserts a couple of enticing ad libs on arco bass, as does Stewart on drums. When all is said and played, Losappio and his colleagues are pros, and the pros clearly outweigh the cons on a relatively-concise but musically-persuasive album whose leader shows considerable promise.