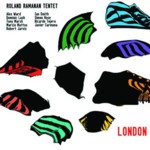 In his sleeve notes to this release, trumpeter Roland Ramanan poses the question, "What can you do with ten musicians that you can't do with five?" It may sound like a Christmas cracker joke with a risqué answer, but don't make up your own punch line. In fact Ramanan's real answer begins, "Well, you can make twice as much noise..." And that is amply demonstrated by this ensemble which brings together ten of the best improvisers from the London scene, many of whom also play together in the London Improvisers Orchestra (LIO). The line up of three reeds, three brass players, two drummers plus cello and bass almost seems chosen to pack a punch. As if to emphasise the point, the album starts with a clarion blast of sound that would be a crescendo for many other large ensembles; the message seems clear: "We have the power and we're going to use it."

That opening track, "Turning the Heel," runs to over twenty minutes, and consists of a series of individual and group improvisations punctuated by scored passages that help achieve Ramanan's aim of exploring the borders between composition and improvisation. Of these scored passages, most bizarre is a riff that the ensemble plays midway through the track; it is so brassy and bombastic that were it played in a seedy club it could signal the arrival onstage of a stripper! Although irony may be intended, the passage does fulfil the desired purpose. The overall impression left by the entire track is similar to that of a rather anarchic jazz big band; the music is vibrant and exciting throughout—at times (despite Ramanan saying it is an Art Ensemble Of Chicago inspired piece) recalling Brotherhood of Breath.

As Ramanan is well aware from his time spent in Peter Brötzmann's tentet, ensembles of this size bring issues that need to be managed in order to prevent their music degenerating into cacophony. Ramanan successfully deploys a range of strategies to avoid that. He is helped by the experience of the musicians in the LIO. In concert, Ramanan noticeably employs the characteristic hand signals that are used to guide the LIO players by whomever is leading one of its "conductions," something of which he himself has experience. The primary source of this tentet's success is that they rarely all play at once. Instead, selected sub-groupings play together, keeping the sound and the approach variable and fresh. The most obvious example of this is "Brass Trio" which features Ramanan and Ian Smith on trumpets and Robert Jarvis on trombone.

As with any band, particularly a big band, the real strength here lies with the quality of the soloists on show. The standard is so uniformly high that to single anyone out would be unjust to everyone else. It is to Ramanan's credit that he has found ways to showcase the talents available to him. As he himself says when completing his answer to that opening question, ..."it's the opportunity to play with such a wide range of timbres and textures that makes the tentet so much fun." Amen to that.

Turning the Heel; 3 Line; Ever Made Go Cold; Brass Trio; Another One.