Any opportunity to catch the UK's top tenors Evan Parker and Paul Dunmall in tandem is enough to set the pulse racing, but factor in a rare sally across the Channel by French-based bassist extraordinaire Paul Rogers and you have the makings of an event. With north London's packed Vortex doing a passable imitation of a sardine can, the assembled punters obviously thought so, despite the heavy rain. Added incentive may have been the success of the same quartet's 2009 encounter nearly a year to the day previously. 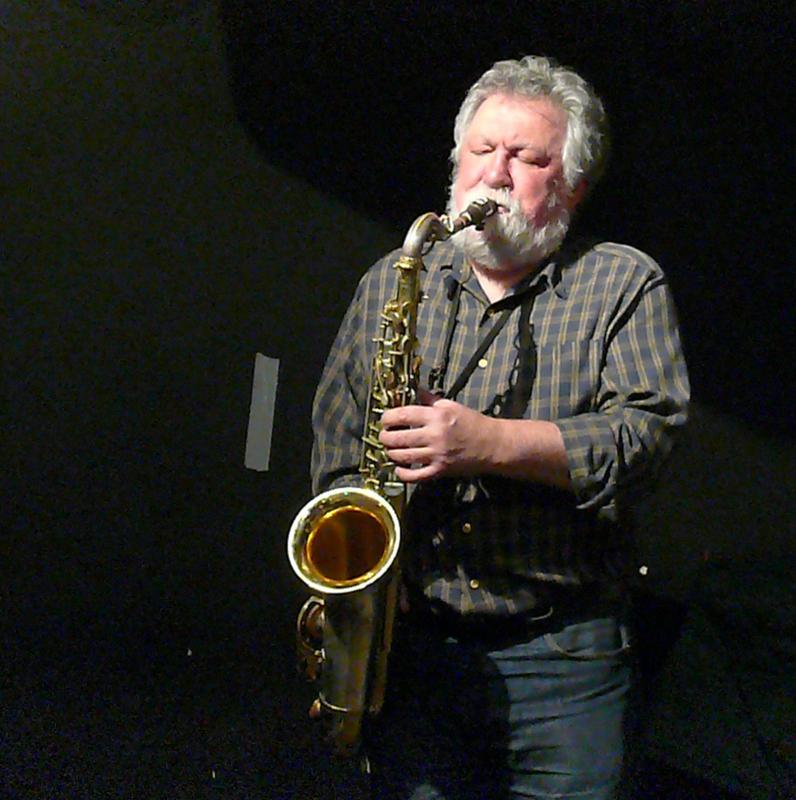 Although billed as a chance to hear Parker with an accomplished and longstanding trio (check out their four CD masterpiece Deep Joy (Duns Limited Editions, 2004) on Dunmall's own imprint) there are more tangled connections at play. Parker has worked with the drummer and bassist in the past, including a wonderful trio at the 1997 Appleby Festival. Of course Parker's guests also comprise three quarters of the improvising collective Mujician, at full complement with pianist Keith Tippett.

Although archetypal free jazz territory was an inevitable touchstone across the two sets, at the same time a probing improv feel arose from solo and duo excursions, with virtually every combination utilized, organically evolving out of the kaleidoscopic movement and variation. After introducing the band, Parker led off with Dunmall blending in and drums and bass purveying a light airy swing. Bright streamers of sound gently unfurled from the bells of the commingling saxophones, each shadowing the other, zapping phrases back and forth in excitable discourse. Soon Parker reined in while Dunmall headed for the wild blue yonder, his long scrabbling lines festooned with melodic apercus at their conclusion. Imperceptibly the intensity increased until Rogers' bow was in rapid fire motion, his bass jauntily angled to form an equilateral triangle with his body, while Levin churned furiously at the drums.

Wonderful acapella horn pairings graced the proceedings: each anticipated the others' note patterns and colorational nuances in twin tenor aerobatics, phrasing and pausing for breath as one. Already a marvelous game of chase, they only became even more animation once bass and drums kicked in. After one final exhilarating excursion, both hornmen subsided, leaving Rogers's folky pizzicato to draw the first piece to a satisfying close.

Having heard reports that Parker had improvised around Thelonious Monk's "Brilliant Corners" with Barry Guy and Paul Lytton at the Sunset in Paris in January, it was less of a surprise than it might have been to latch onto the unmistakable strains of "Evidence" emerging during an unaccompanied duet with Dunmall early in the second set. Parker has talked of investigating the Monk fakebook and that exploration of distinctive intervals carried over here, again affirming links between the so-called avant-garde and the so-called tradition. Whatever the inspiration, the two reedmen sported big grins as they cavorted onwards, the familiar references trailing in their wake. 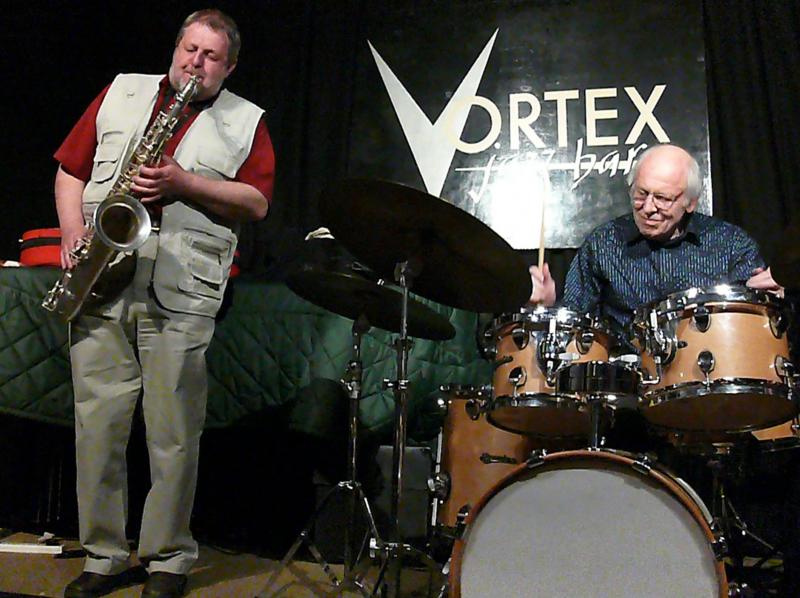 Parker had the slightly gruffer tone of the two tenors, but seemed in relaxed mode tonight, positing burnished proclamations with tangential throaty asides, situated in lots of space, evoking a markedly abstract quality. One series of cyclical figures erupted into trademark guttural gobbling runs, with some overblown squeaks around the edges, eventually becoming a fiery duel with Levin. Of the two Dunmall tended to be more animated, swaying from side to side, to and fro, with eyes tight shut. At one point he called on his vast reservoir of experience (not least teenage touring with Johnny Guitar Watson) to funkily match Levin's staggered drums: down and dirty, but in typically oblique fashion. 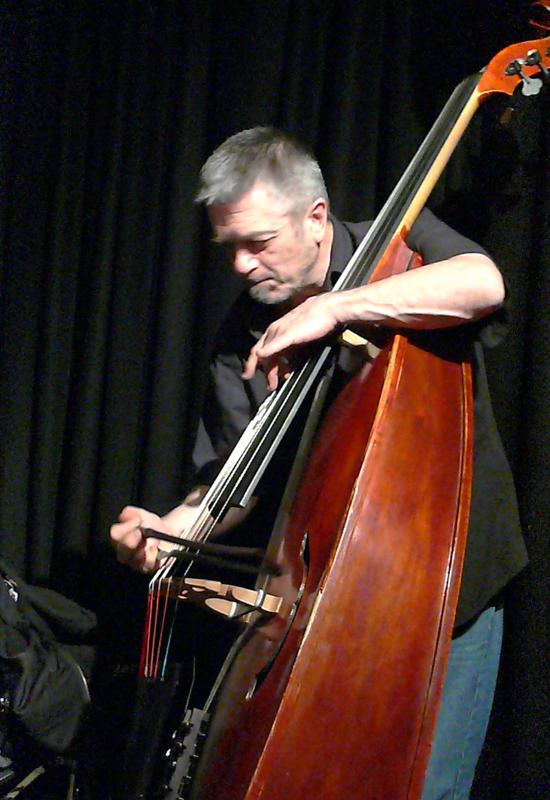 Whether in ensemble or alone, the open exploratory ambience provided an excellent milieu for Rogers and his unique 7 string bass. An additional 14 fine strings stretched underneath the fretboard provide sympathetic vibration. In fact it resembles a Barbara Hepworth sculpture with strings attached as much as a musical instrument. In arco correspondence with Levin's hihat patter, the bassman asserted momentum through a delicate tracery, before exploring high register harmonics. Levin sensitive to the dynamics played very quietly but still kept loose time. A passage of hyper fast sawing elicited a perfect echo of the tonality from the drummer who rubbed one stick on another in response. Finally Roger's wavering arco, sounding like radio interference, tempted Dunmall into his orbit with a low droning tremolo, as a prelude to another voyage of group invention.

Wherever he strayed, Rogers provoked inspired rejoinders. A first set solo contrasted explosions of scraping with a filigree delicacy, enticing Parker to join in highly lyrical vein. Roger's lifted his leg as he bowed to aid getting just the required attack. A wondrous exchange ensued with a sequence of circular breathed tenor married to sustained cycling bowing. Parker essayed quiet harmonic distortions in parallel with Roger's slender shrieks to close the set on a high. Later, wielding his bow like a magic wand, Rogers flicked to and fro in upper register latticework with grace note cries, until switching to an almost guitar like plucking. Levin joined in minimalist dialogue: a rub of stick on drum head or rims judged sufficient answer to a bowed squeal.

There appeared no end to their intrigue, leaving the audience delirious, and this listener already looking forward to next year's reunion if such occurrences become annual events. In the meantime a Mujician tour mooted for the autumn may be the next chance to appreciate Rogers' talents on these shores in train with his illustrious compatriots.