By DAN BILAWSKY
February 15, 2013
Sign in to view read count 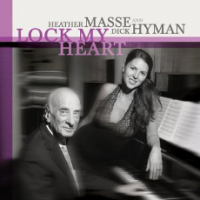 In a way, vocalist Heather Masse has come full circle with the release of Lock My Heart. As a youngster, Masse used Dick Hyman's Professional Chord Changes and Substitutions for 100 Tunes Every Musician Should Know (Warner Bros., 1986) as a vocal road map through the world of jazz standards; little did she know she'd be recording with the very man who put the book together less than two decades later.

Masse, who hails from Maine and resides in the Catskills, earned her jazz vocal stripes at the New England Conservatory, but she earned her reputation in the world at large as a folk singer with The Wailin' Jennys. Her membership in this Juno Award-winning outfit helped her to establish her folk credentials, but Masse never completely abandoned jazz; she maintained dual citizenship, made evident by her work with violinist Mark O'Connor and the release of a jazz-inflected folk EP, Many Moons (Self Produced, 2008).

In many ways, this walk-both-sides-of-the-fence persona is responsible for the initial meeting between Masse and the legendary Hyman; their first encounter took place on Garrison Keillor's famed folk-leaning radio show, A Prairie Home Companion, where they performed pianist Duke Ellington's "I Got It Bad (And That Ain't Good)." That number, along with eleven other stunners, appears on Lock My Heart.

This mostly standards set gives pause to admire Hyman's effortless mastery of his instrument, Masse's draw-you-in talents and the combinatorial strength of both parties involved. Masse can beautifully ruminate in an exposed setting ("Bewitched, Bothered And Bewildered"), soar atop Hyman's high energy piano work ("Love For Sale"), and inhabit a headspace well beyond her years ("September Song"). Her voice is warm, direct and remarkably consistent across the entire program; the only exception is the album ending "I'm Gonna Lock My Heart (And Throw Away The Key)," where she apes Billie Holiday a bit and intentionally adds a dash of helium to her pipes.

Hyman is predictably fabulous throughout and, while he threatens to steal focus from Masse on one or two occasions (i.e. "Lullabye Of Birdland"), that fate never fully comes to fruition. He understands that technique is a means to an end and, while he possesses an arsenal of ideas in his hands and mind, he only takes out the big guns when the music calls for it. A comparison of "Love For Sale," which is driven with unbridled pianistic enthusiasm, and "If I Called You," which features simple, yet effective backing, proves this point. The latter number, a gorgeous Masse original with stop-you-in-your-tracks potential, proves to be one of the album highlights.

By the time this review is published, Masse may or may not be back on the folk side of the fence but, if she has indeed flown on, she'll hopefully come back to visit jazz on occasion; a songbird with her talents, after all, should be free to fly wherever she pleases.

Bewitched, Bothered and Bewildered; Lullaby of Birdland; Since I Fell for You; Love is Here to Stay; September Song; Lost In The Stars; Love for Sale; If I Called You; I Got It Bad and That Ain’t Good; A Flower is a Lovesome Thing; Morning Drinker; I’m Gonna Lock My Heart (And Throw Away the Key).