By JOHN KELMAN
October 8, 2009
Sign in to view read count 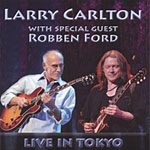 With blues/jazz guitarist Robben Ford's Soul on Ten (Concord, 2009) receiving widespread attention, it's a good time to look at Live in Tokyo, a somewhat overlooked but unmistakably smokin' 2007 release from another West Coast guitar god, Larry Carlton. Carlton invited Ford to join his band for some dates in Tokyo in the fall of 2006, and it would be hard to find two more compatible yet distinctive guitarists for a set that ranges from down-and-dirty blues to burning samba and a lot in-between.

The two go back over 30 years, sometimes playing with the same artists, just not on the same sessions. Both worked with singer/songwriter Joni Mitchell, and while Carlton was delivering early career-defining moments with Steely Dan, Ford was adding some signature licks to Little Feat. Ford would ultimately move in a more decidedly blues-centric direction while Carlton ventured near smooth jazz territory (but his playing always elevated it above the pack). For Live in Tokyo, both find common ground that leans closer to Ford's stylistic direction, with undeniably virtuosic playing but, as ever, taste trumping technique in a set of largely original material.

Ford's hard-rocking "That Road," first heard on Jing Chi Live at Yoshi's (Tone Center, 2003) with bassist Jimmy Haslip and drummer Vinnie Colaiuta, gets the set started, setting the tone for what's to come in this seven-song, one-hour set. With drummer Toss Panos and Carlton's son Travis on bass—both also members of Ford's Soul on Ten group—along with keyboardist Jeff Babko, whose Mondo Trio (Abstract Logix) was a sleeper hit of 2007), the grooves are deep. Carlton and Ford are clearly the stars of this show, receiving the lion's share of solo space, but they'd simply not sound this good without the support of their highly capable rhythm team.

Carlton may have veered towards the smooth, but on his recent Bluebird albums Sapphire Blue (2004) and Fire Wire (2006), he made a welcome return to a harder-edged, blues-tinged sound that dovetails perfectly with the direction Ford has taken since Robben Ford & The Blue Line (Stretch, 1992). Both are at their absolute best on Carlton's funkified "Burnable," where their simpatico ability to combine bluesy bends with bop- inflected lines demonstrates why they've both been such in-demand session players throughout their careers. Ford sings on the title track to his own Talk To Your Daughter (Warner Bros., 1988), a boogieing blues written by JB Lenoir and Alex Atkins that finds both guitarists taking no prisoners and, as with Blues on Ten, his voice has never been better.

Carlton's fast-paced "Rio Samba," a throwback to his early days as a leader on Mr. 335 Live in Japan (Flyover, 1979)—in addition to demonstrating the jazzier side of both players—also contrasts Carlton's denser, overdriven hollow-body Gibson Mr. 335 tone with Ford's tarter Les Paul. Good info for guitar geeks, perhaps, but for the rest of the world all that's needs be known is that Live in Tokyo represents some exciting guitar work and the kind of thrilling interaction expected from two of jazz's tastiest fusion players.