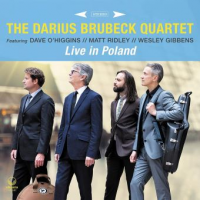 Early on in his career, the pianist Darius Brubeck bowed to the inevitable. Accepting that he was always going to be compared to his father, Dave Brubeck, he both embraced his heritage and sidelined it. In the 1970s, embracing it, he was a member of Two Generations Of Brubeck and The New Brubeck Quartet, groups which played original material but had audiences who came along mainly to hear performances of tunes written by or associated with Brubeck père: "(It's A) Raggy Waltz," "In Your Own Sweet Way," "Blue Rondo A La Turk," "Unsquare Dance" and "Take Five."

In 1983, sidelining his heritage, Brubeck moved with his South African wife to Durban, where he taught music at the University of KwaZulu-Natal. He founded the first degree course in Jazz Studies at a South African university and, for fifteen years post-apartheid, led the band Afro Cool Concept. He stayed in South Africa until 2006, and then moved to England where, a couple of years later, he formed the Darius Brubeck Quartet.

These strands of Brubeck's life came together in 2018, when the Quartet was invited to tour Poland to celebrate the 60th anniversary of the performances the Dave Brubeck Quartet had given in the country during a US State Department-funded behind-the-Iron-Curtain visit. In Poland, that 1958 tour is remembered as a catalyst for the country's long march to freedom from the USSR: among the exhibits at the Solidarity Museum in Szcecin is a copy of a Polish-language Dave Brubeck concert programme. Aged ten, Darius had accompanied his father on the tour.

Live In Poland was recorded on the final night of the 2018 tour, at the Blue Note Jazz Club in Poznan. It is an engaging, unpretentious, hard-swinging delight. There are three fine Darius originals plus two pieces written by Dave—"In Your Own Sweet Way" and "Dziekuje" (which means "thank you" in Polish)—Hugh Masekela's "Nomali" and Paul Desmond's "Take Five."

It must take some nerve to play "Take Five," particularly for a drummer, for Joe Morello's solo on the original 1959 recording still sounds extraordinarily intense. But Wesley Gibbens' solo is thrilling in its own right, making less use of space and snare-drum rolls and more of iteration and tom-tom patterns. Brubeck shines here and elsewhere. His solo on Masekela's "Nomali" is glorious.

Earthrise; In Your Own Sweet Way; Matt The Cat; Nomali; Sea Of Troubles; Dziekuje; Take Five.