BY MARK SULLIVAN
August 5, 2016
Sign in to view read count 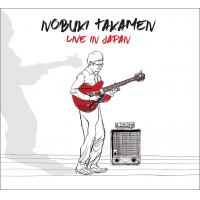 When last heard from, guitarist/composer Nobuki Takamen had released his first solo album, Solo Guitar (2014). He is active on the New York scene, but has returned to his native Japan for an annual tour for many years. For his sixth album he has chosen to document live performances of his trio with bassist Toshiyuki Tanahashi and drummer Naoki Aikawa, long-time musical collaborators for more than a decade.

Takamen is definitely a bebop-oriented player. Although this is an all-original double-CD set—so there are no covers—he makes reference to the tradition in various ways. "All Waltz" is an especially clear example. Dedicated to legendary guitarist Jim Hall, it is an "All The Things You Are" contrafact in waltz time. The composition refers to Hall's repertoire, and the trio's highly interactive interpretation is in line with Hall's nearly telepathic trios, especially the one with bassist bassist Don Thompson and drummer Terry Clarke. "Gee, Seventh Avenue" was inspired by a friend's story about an Art Blakey show at Sweet Basil. It's hard bop all the way, with an appropriate drum solo (and a bass solo as well).

There are also influences from outside of jazz. The opener "Freddie's Mood" is a latin tune with a definite Bo Diddley beat. "Jimi's Swing" uses a Jimi Hendrix chord riff for the intro and breaks, putting Hendrix into a swing context, just as the title promises. Takamen arranged a Japanese nursery song, "Akatonbo" (Red Dragonfly), which features a lovely lyrical arco bass solo. Another cultural influence surfaces in ''Sjećanja za Pamćenje'' (Memories to Remember) inspired by a European tour: it has a folksong quality.

The closer "Blues For Riley" brings the music firmly back to its jazz roots, with a structure reminiscent of "Willow Weep For Me" and a couple of choice Thelonious Monk quotes. A fitting ending to a program full of variety and highly empathetic group interaction. Sometimes there's no substitute for the familiarity that a long playing partnership brings. This is jazz guitar trio music at its finest.