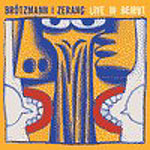 Perhaps you do know it all. That is, you believe you know what Peter Brötzmann sounds like. Certainly, if you have been paying attention for the last forty years, his blasting machine gun saxophone has caused you to either turn up the volume or turn it way down.

To those who believe that "if it is too loud, than you are too old, this duo record with Michael Zerang will not disappoint. But, if you are also a connoisseur of the subtleties of improvised music, there is a mother-load available here too. We can assume that Chicago-based drummer Zerang is the impetus for the agility and graciousness of this recording, but the setting plays a large part here. Recorded live in Beirut 2005, this was Brötzmann's first visit, as he participated at the Irtijal Festival of experimental music.

It was also Beirut's first encounter with the ferocity that is Brötzmann. His duo encounters with percussionists have been well documented, like the Nasheet Waits duo disc, Live At The 'Bottle' Fest (Eremite, 2005), his infamous collaboration with Han Bennink and performances with Hamid Drake, Sven-ÅkeJohansse and Raymond Strid. Although Zerang has collaborated with Brötzmann in his Octet, Tentet, and Quartet, this is his first duo performance. Zerang, a first generation Assyrian/American, has been a key player in the Chicago scene, playing with reedmen Ken Vandermark and Fred Anderson. His duo roles have included collaborations with cellist Fred Lonberg-Holm, saxophonist Mats Gustafsson, bassist Tatsu Aoki, and legendary duets with fellow percussionist Drake.

The disc opens with a thirty-minute tenor/drums power surge that doesn't catch its breath until nearly ten minutes in. When they do ease—the groundwork completed—a peaceful feeling envelopes the pair and a pathos is established. When Brötzmann sets his horn down fourteen minutes into the track, Zerang's rolling solo introduces the blues theme ending of the piece.

The drummer takes up the darbuka, a traditional Lebanese instrument, on "Yalla Kholoud, while Brötzmann chooses his taragato. The Eastern sounds produced, certainly familiar to the audience, must have also been quite shocking in the context of this free improvisation. The pair returns to tenor/drums for "A Daytime Nightmare that, again, resolves itself in a cathartic blues. The disc ends with Brötzmann on clarinet and the subtle tones of Zerang's skins.

In the context of this meeting and the audience's first exposure to these skilled musicians, this was, indeed, a historic encounter.