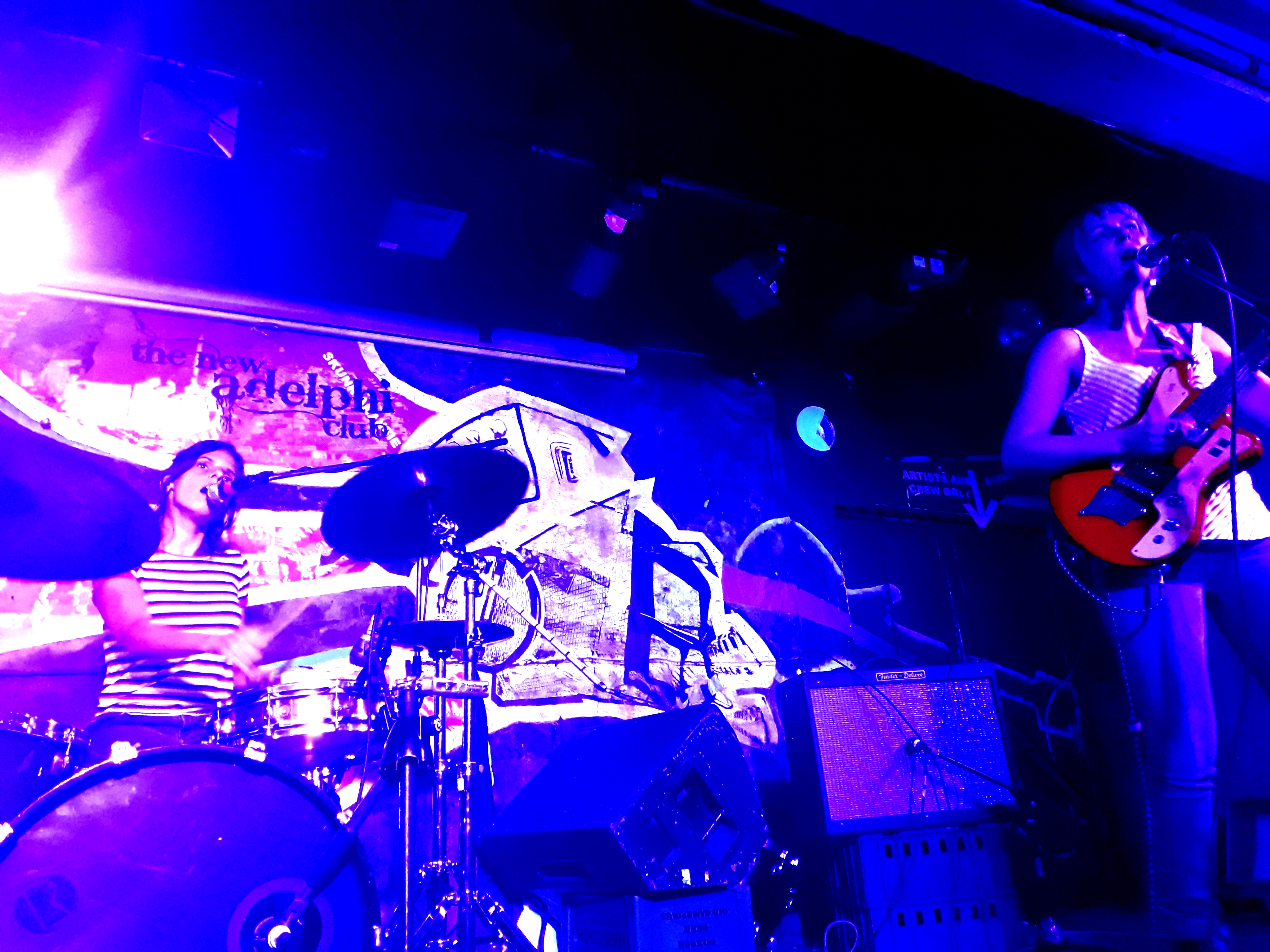 The New Adelphi Club in Hull, England, is not so new anymore. In the last couple of months this legendary alternative haunt has celebrated its 35th anniversary, since opening in the heady post-punk days. It's mostly been a rock'n'roll joint, but is welcoming to many musical styles. The Adelphi has an extremely unusual location, basically at the end of a Victorian terraced housing row on an otherwise quiet residential street of the north-eastern port city of Hull, UK City Of Culture in 2017. The Adelphi was opened in 1984 by music freak Paul Jackson, who is still found lurking about the club most nights, an obvious eternal fan of the music.

Representing the Adelphi's alternative nature, the Birmingham band Pram included the club on their short tour, spreading an abstract exotica soundtrack/electronic jazz mood aura around the dimly lit space. Sam Owen's vocals wove into the instrumental layering, not too much out front, but subsumed in the spangly, chiming, choppy and burbling flow. The shunting trombone of Harry Dawes suggested something of an Ealing movies lollop, whilst samplist Max Simpson specialised in mood enhancement, and Owen swapped guitar and bass roles with Matt Eaton, who mostly provided needling funk micro-figures on six-string. Fliss Kitson adopted a Beefheartian tumble on the drums, emphasising skin textures just as much as rhythm structures.

Multi-instrumental palettes are a Pram norm, with theremin, stylophone, clarinet and melodica included, at the very least. Owen unveiled her eerie flute, and the organic robo-slink moved on, hand-tinkered rather than sophisticatedly programmed. A waltz for a lumbering dullard emerged, with flute and 'bone offering their poised embellishments. Owen changed again, choosing soprano saxophone for an Alice Coltrane flavoured phase, joined by Dawes, who also switched to a matching snake-horn, the pair draggin' through a sleazy, twinned wailin.' Three decades together have allowed Pram to cultivate an immediately recognisable sound, overtly prey to multiple style observations, but with the particular combinations of half-familiar dream elements creating some thing previously unheard.

The Brackish arrived from Bristol, debuting in 2014, bringing out three albums since then, and perhaps loosely jolting inside the instrumental post rock category, with their manic, angular guitar riffage and burning edges. Neil Smith and Luke Cawthra abused the six-strings, joined by bassist Jacob Tyghe and drummer Matt Jones. When they geared up into full flood, we could discern a shared love of surf music, found in a deeply alternative guise, but there was also abundant math rock, Frippersonics and general chiming avant Shadows/Ventures twangerama.

Guitar roles were exchanged, from structural lines to unleashed solo freedom, laced with acid bite, rearing up from their silken bed of entwined systems patterns. Cawthra probably grasped more spotlight solos than Smith, but the latter still leapt in with frequency, fluid contortions flowing. At times, they sounded like a twisted Chris Isaak, on a Lynchian suicide mission, a math headbanging session, with a studded rock-out towards a complicated shuffle. King Crimson rending into Sonic Youth. Maybe post funk would be just as valid as a description, but the mesmerising guitar spangles were also part minimalist, part surf rock and part Congolese soukous. The Brackish set flew past speedily, but these Bristolians specialise in an intensely condensed release, so we were all still totally spent by climax-time.

Here's a veteran French punk foursome, but not so veteran that they were on the scene in the late 1970s. Just not teenagers. These Parisians have a significant body of work, but remain something of an underground phenomenon, at least in the UK. They formed as recently as 2006, when Marian (vocals, guitar) met Aurélie (vocals, drums) but their short, angry, attacking (though sometimes fleetingly poppy) ditties are soaked in pogo-ing blood, drums stuttering, guitars cutting, vocals yelping. The band-name is French for 'woodcock,' strangely. Their songs are so short that your scribe missed an entire number, upon fleetingly visiting the pissoir. Aurélie sang "Do You Wanna Dance?," and the encore sounded very much like The Fall's "Pay Your Rates," but might not have been that song, in reality. Les Bécasses were stripped to the sinew, their songs not weighted by any surplus flesh that might impede the pure punk projectile.

Here's a sort-of veteran Canvey Island combo, although nowadays there are no actual original members present in Dr. Feelgood. Even though mainman Lee Brilleaux moved to the further plane 25 years ago, three of the current band members were by his side in the final edition of the Feelgoods, who had initiated their bluesy pub rock trajectory way back in 1971. Singer Robert Kane is the most recent addition, and he's now celebrating two decades as a somewhat slicker frontman. He's got the rock star moves, but he's still pickled in the rhythm'n'blues sound of the old repertoire, adding harmonica asides to boot.

The set hadn't changed overmuch since your scribe last caught them in Old York, 2013, but there are so many classic Feelgood songs that it's difficult to excise any, and doubtless even more of a challenge to write new numbers to compete. It's not that kind of combo. Even right at the start, they could afford to release "Roxette," "She's A Wind-Up" and "All Through The City," followed by a tough bottleneck section that opened with "Dust My Broom" (Elmore James) and closed with a blood-spurting finger of explosive guitarman Steve Welwyn.

The small-ish Adelphi boasted a big hall crowd singalong stature for "Back In The Night," another fine song in the form of "Milk & Alcohol" was let loose, and the night ended with an extended "Rollin' And Tumblin,'" penned by Hambone Willie Newbern, but popularised by Muddy Waters. Welwyn got to grip the ears hard once more (while simultaneously slingin' his guitar into our collective stomach), even with bloodied pinky. Then, as the cheery season loomed, they offered a hard-ass reading of "Run Rudolph Run," from Chuck Berry, the rough Yule spirit swilling in the house.