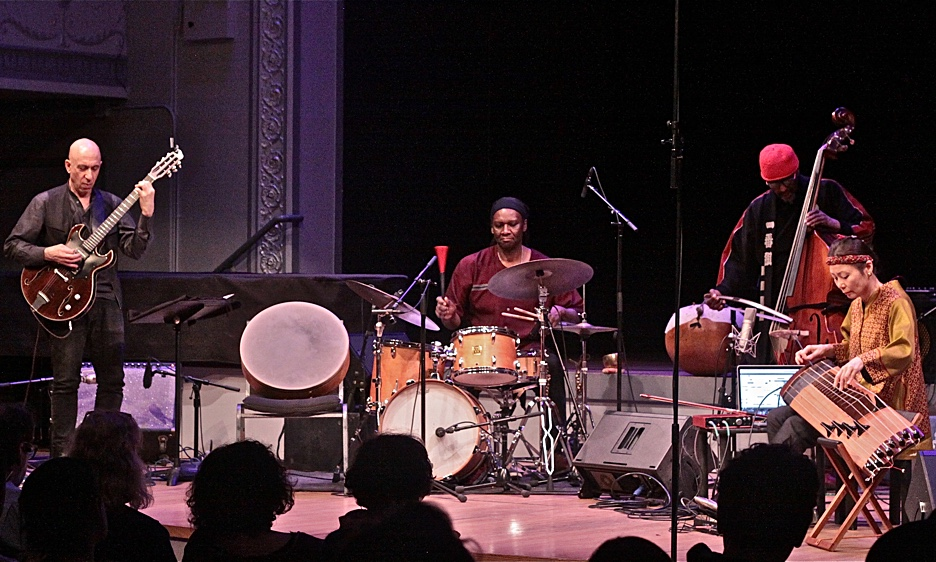 Four Dimensions is a quartet that brings together a partly unlikely grouping, with bassist William Parker and drummer Hamid Drake having the most visibly long-standing partnership. Guitarist Elliott Sharp usually inhabits a different, though musically compatible, zone, whilst the Korean geomungo player Jin Hi Kim is the least familiar member, at least to those of us who follow the downtown improvising scene. She's actually the leader of this new outfit, and has certainly pulled in some of the best of NYC's free-formers. The geomungo can be described as the Korean equivalent to the Japanese koto, and JHK plays both acoustic and electric versions, the former in the first set, the latter in the second. She prefers the 'komungo' spelling, it seems.

The programme may well have been composed, but improvising structures were in place, at least in terms of laying out the performer permutations of the two sets, dividing up into sections where perhaps a chosen duo would interact, or a given player would be directed to take a solo. The overall character suggested improvised music, despite such advance illustration. The acoustic first half presented "Joy Of Flying," whilst the electric second portion revealed "Exceeding 2," both of these being premieres.

Throughout the gig, JHK and Sharp formed a close union, as the guitarist appeared set on manifesting the bluesy aspects of Korean twang'n'slide tradition. Or was it that JHK was particularly mirroring Sharp's bottleneck clatters? We don't often get the chance to hear the Korean avant blues. They met on the borders, both of them penetrating to the other sides of the globe, both of them using a hard-attacking slide device on their robust strings. Except that Sharp broke one of his, soon into the first set, carrying on, unperturbed. As might be expected, Parker and Drake soon got into one of their springy, taut, almost-funk hook-ups, but they were just as easily inclined towards sudden bouts of abstraction.

JHK played completely solo for a while, highlighting her heavy string-action, struck quite powerfully with her large wooden spatula. Brooklyn's Roulette venue has further added to its array of acoustic baffles on the ceiling, as well as enhancing its speaker system, resulting in a particularly warm, deep resonance to the various twangings and sharp strikes. Sharp hurled in every trick in his vocabulary, using both hands on the upper neck, deploying slide, metal rod and e-bow, all in swift succession. Parker picked up his West African douso n'goni (like a small kora), and Drake moved to sit stage-front, with his North African bendir frame drum. This was turning into quite a fusion of traditions!

It was rewarding to hear three out of four of this band being gently goaded into a softer, more meditational sonic place, influenced by the home roost of Korean tradition. There was much less of improvisation's more violent tendencies. Although, the second set featured JHK on amplified geomungo, a different axe, plugged into a MIDI-system, and played using a wah-wah pedal. Sharp switched to electric guitar, also with wah-wah. This was like early-1970s Miles In Korea! Parker wafted shakuhachi Japanese flute into the mix, and the geomungo was sent towards Roulette's rear-wall speakers, creating an electroacoustic spatial adventure. JHK bowed, whilst Parker fiddled with an electronic knob-box, and Sharp stuck a thin stick through his neck, Parker swapping to a double-reed flute, from either the Indian or North African traditions. Amidst all of this highly successful melding, and transcendental genre-transfusion, it didn't really matter...

Around an hour later, at Birdland, a short skip from Times Square, the Canadian soprano saxophonist and flautist Jane Bunnett led her all-female Cuban posse Maqueque through the second set of a one-night engagement. They opened with "Dream," highlighting the free-ish piano soloing of Dánae Olano, and by the second number the band's drums and percussion pair were heating up, along with singer Melvis Santa's hand-held guiro contributions. Magdelys Savigne began on congas, then brought in her stack of báta drums, whilst Yissy Garcia powered with her straight drumkit, although not in the fully extroverted manner that she adopts on larger festival stages. Subsequent songs found Santa adding clavés and shekere to her percussion collection. A hardcore Cuban orisha Elegua invocation followed, the drummers working alongside a heavy bass roll from Celia Jiménez, who also penned the next tune, "La Flamenca Maria." Bunnett provided several impressive solos, but could do with improving her stagecraft, when addressing the audience. She went beyond 'endearingly scatterbrained,' moving closer towards a tentative 'completely disorganised.' The only dip in the set was an overly smoothed-out reading of "Ain't No Sunshine," which is an already much-too-smooth Bill Withers song.

If uncut bebop (or hard bop, or post-bop) is desired, the real deal can usually be found in Greenwich Village basement club Smalls. Your scribe spontaneously descended, to catch an unfamiliar artist, and as is frequently the case in such a Smalls situation, emerged two hours or more later, suitably impressed. Asaf Yuria is an Israeli saxophonist, with a clutch of original compositions, peppered with standards, partnered by Josh Evans (trumpet), Mark Williams (trombone), David Bryant (piano), Ben Meigners (bass) and Mark Whitfield Jr. (drums). Their late night set-placement can't hold them back from full speed-demolition, soloing like crazies, with only a few restful ballads interspersed throughout the action. The leader launched into an introductory solo, on the first tune he ever wrote, and was soon followed by competitively thrusting solos from his horn-mates. Smalls was particularly cookin' for a Thursday night, the sextet following up with "Wise Eyes," a more reclined ballad. Their third tune reclaimed the storming approach, notably with a trumpet and drums dialogue, piano and bass eventually creeping in, before a manic tenor solo from the leader provided a heated peak for the close of the first set.