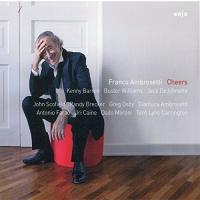 Milestone birthdays deserve major events. And so we have Franco Ambrosetti's Cheers, a star-studded seventy-fifth birthday celebration that's both a walk down memory lane with friends and a stroll over different terrain for the man of the moment.

In January of 2017, just over a month after Ambrosetti's actual birthday, the septuagenarian starring man found himself at the center of a musical party in his honor at Brooklyn's Systems Two Studios. There, surrounded by most impressive company, he wielded his flugelhorn and traced his way through a collection of songs with the fluid grace that's come to characterize his work on a series of celebrated dates stretching back nearly four decades on the ENJA imprint.

Joining forces with a set of familiar faces—A-listers that have appeared on record and/or on stages with this Italian horn heavy over the years—Ambrosetti delivers a program that's neither mired in nostalgia nor taken by fashion's fickle outlook. An intelligent mix of recalibrated standards and originals suited to this setting makes for a beautiful listen with plenty of peaks and no valleys to speak of. An "Autumn Leaves" bolstered by Buster Williams' sly and springy riffs, driven by Jack DeJohnette's cymbals, built around Uri Caine's pianistic chassis, and given over to Ambrosetti's modal moodiness, augurs well for this album. It hints at Miles Davis in its demeanor, but it's pure Ambrosetti in its accent.

The eight tracks that follow don't disappoint or disprove that initial feeling of positive energy given over through "Autumn Leaves." Ambrosetti's daydreaming horn is all class working atop the gilded trio of Williams, DeJohnette, and pianist Kenny Barron on "I'm Glad There Is You"; original "Drums Corrida" makes history, teaming DeJohnette and his one-time protégé, the masterful Terri Lyne Carrington, in a spicy-turned-roiling scene; "The Smart Went Crazy," putting guitarist John Scofield and alto saxophonist Greg Osby in the sunny spotlight, references Ambrosetti's long association with the song's composer—Swiss pianist George Gruntz; and a matte-finish take on Joey Calderazzo's "Midnight Voyage" nods to Michael Brecker while bringing aboard the dearly departed saxophone icon's famous brother, trumpeter Randy Brecker.

Whether waxing nostalgic on a ballad, flying high on a swinging foundation, or simply stepping out of the way to let his friends shine, Ambrosetti proves the model of assurance here. Time has clearly taught and treated him well.

Autumn Leaves; No SIlia No Party; I'm Glad There Is You; Bye Bye Blackbird; Drums Corrida; Someday My Prince Will Come; The Smart Went Crazy; Midnight Voyage; Body And Soul.