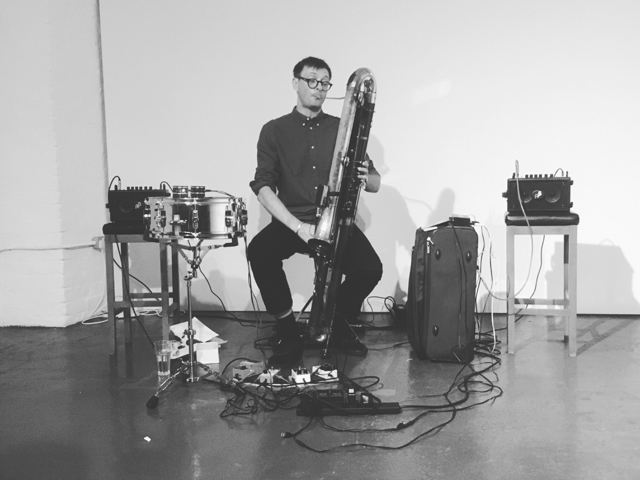 Centrala is yet another one of those individualist art joints in the post-industrial Digbeth area of Birmingham, balancing audio and visual forms. They have a regular diet of evening performances, usually of a more unusual bent. Coming up from London, Thomas Stone was joined by opening act Takahiro Kawaguchi, both of these dudes dedicated to the bleed between gigging and performance art.

Kawaguchi had an arrangement of what looked like old-fashioned car horns, with a predilection for on/off footpedal activations, buzzing then not buzzing. Whirring and humming also, as it slowly became apparent that he was inflating a voluminous polythene sack, whilst producing multiple high tones. How did he get these tones to creep around the walls, spatially thrown? This was some kind of measured horn-parp symphony, at very high frequencies. The bag got bigger, and Kawaguchi's cellphone slid off its surface, clacking to the floor. Was this a deliberate act? Then, to climax, he let the air out slowly. This piece definitely required its visual in-the-room experience, to help the listener embrace its entirety.

Stone's set came across as more of a direct gig-experience. Most shows would, following Kawaguchi. He was armed with a contrabassoon, a snare drum, and a suitcase, flanked by a pair of small speakers. A recording of what sounded like electric bass underpinned the process of Stone's horn travelling from its core sound to a cello-like mournfulness, making strategic pauses for consideration. Vibrations were caused on the snare-head, triggered by an e-bow-type device, raised in volume, prompting reverberant pulses, and mixing with the contrabassoon honey. Eventually, Stone captured himself for looping, and then interfered with the results, glitching and crackling. He operated in the hinterland between composed sound and free-form matter, again making the visual process an integral part of the performance. Sitting within a gallery, the select-but-astute audience inhabited a virtual live installation, and a gig, simultaneously.

Fat Chops Big Band continue to present a monthly Sunday lunchtime gig at the Moseley All- Services Club, always inviting a special guest to provide the climactic stretch for each of their two sets. Together for over two decades, they are surely one of the mightiest big bands in the UK, but perhaps not féted as much as they deserve. Still in the ranks, as ever, are saxophonist Chris Bowden, now concentrating on tenor rather than his old alto, plus bassist Ben Markland and drummer Neil Bullock, the latter being the mighty Buddy Rich-styled stoker (or perhaps some of you might prefer Gene Krupa) of this already storming Fat aggregation. John Ruddick senior and junior remain in the trumpet section, the latter charged with running the Chops. Junior sister Jo Ruddick plays keyboards, and Mike Adlington (trumpet) and Richard Foote (trombone) are also included in the ranks.

The Chops slid into a Bill Holman arrangement of "Malagueña," a Cuban number, as popularised by Stan Kenton, delivering a dramatic low end bullishness, with slicing trumpet attacks, Bullock steaming through near-drum'n'bass beats. Bowden's solo was brief but powerful, overblowing to a swift climax. When gig guest Percy Pursglove joined them, he sizzled through Dizzy Gillespie's "Con Alma," straight into his first trumpet solo following a short introduction (Pursglove is also an equally proficient bassman, but was here in his horn capacity). A high note splendour bloomed, then they slowed into a Bobby Shew arrangement of "Body And Soul," in a Latin style. The band cut to complete silence, as Pursglove's flugelhorn ascended.

For the second set, Cole Porter's "Get Out Of Town" (arranged by former Chops saxophonist Martin Williams) featured a striding solo from the new Fat 'boner Foote, which was excellent apart from being too close to the microphone (the band should sometimes turn down the microphone volume a touch, as it can become particularly oppressive down at the front tables). Andy Shillingford shone on soprano saxophone during "Last Season" (Maria Schneider), and then Pursglove blasted back with "Joy Spring" (Clifford Brown, arranged by Shew), producing a high flugel cascade, his tone powdery, but with full attack. Thanking the audience profusely, Pursglove quipped that "it would just be a bunch of weirdos playing notes in a room together," without their enthusiastic presence.

Martin Carthy remains a sturdy fixture on the UK folk club scene, often playing to relatively small audiences given his massive stature as a major force over six decades, specialising in a hardcore interpretation of the repertoire. As the familiar "John Barleycorn" progressed, Carthy did seem a touch slower, and more deliberate in his guitaring, but he's now at the grand old age of 77, and still reasonably armed with enough momentum. His detailed figures are less ambitious, and he's quite forgetful of lines nowadays. Even David Bowie ended up using a visual prompt screen, for his later gigs. The potentially quiet, concentrated sets also had a problem with big fridge hum, to the rear of the room, but still audible from the frontal rows, and this distraction was exacerbated by an insistently beeping alarm that was either coming from outside, or even an adjacent back room. Add these factors to a vocal microphone that was set way too low, and a Carthy who frequently mumbled during his introductions, as well as preferring to keep his distance from the microphone, and we had a frustrating scenario in a venue that's usually perfect for such intimate gatherings.

"The Whale Catchers," "Scarborough Fair" and "The Bows Of London" followed, classics all, the last one concerning bodies in the river: 'she floated up, she floated down....' With "Bill Norrie," Carthy carefully enunciated its many verses, his direct strums leaving open spaces, as he savoured the words, concerning the kissing a beheaded head. The usual dark subject matter! It was time for a lighter song (at least on the surface), "The Devil And The Feathery Wife," which provided a chucklesome climax, a rolling in bird droppings and feathers, topped by a delicately wandering guitar instrumental delivery of the theme from "The Third Man." This second set, with sonic difficulties resolved, easily transcended the distractions of the first.