By VITALIJUS GAILIUS
February 10, 2021
Sign in to view read count 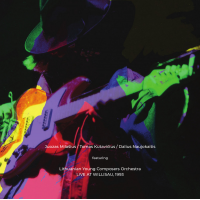 Juozas Milašius, Dalius Naujokaitis-Naujo and Tomas Kutavičius were the most provocative figures on the Lithuanian scene in the 1990s. Playing bebop or following the Ganelin Trio tradition was not the their thing back then (and it is not in 2021 either). They played passionately and intensely and beyond genre boundaries. Stories about destroyed pianos and audiences running away from venues are still alive.

Live at Willisau, 1993 was recorded during the Willisau Jazz festival in Switzerland. The concert begins with "String Walker" composed by Juozas Milašius. It is performed by two instruments—guitar and, be ready to raise your eyebrows, long, tensed, metal wire. Milašius is a sophisticated guitar hooligan whose dynamic range is considerable. He drifts between minimalistic soundscapes and harsh noise. Nevertheless, "String Walker" sounds relatively gentle and smooth. The dialog between wire and guitar strings is full of pitch changes caused by straining up or down the wire. "String Walker" is perhaps the most immediately engaging part of the record.

Elsewhere the album contains an enormously wide dynamic range, unpredictable structures and unrestrained energy. "Sailor's Nightmare" catches the listener with a ritualistic vibe generated by unstoppable drums reminiscent of Milford Graves. The first part of "Play Me" is a litany of insanity. Screams, intense and loud guitar, brutal piano and blasting drums evoke a battleground. However, in the middle of this madness, the intensity drops down and spectral, spooky passages reach listeners' ears. Gradually, almost stealthily, we reach "Reflection Nebula," where Kutavičius' piano engages both classical and jazz traditions. The track ends the concert on a peaceful note.

Can we call Live at Willisau, 1993 euphonious? Strictly speaking, not. It is full of harsh, raw and even chaotic sounds. But it also has heavenly passages. Live at Willisau, 1993 should be filed somewhere between the Peter Brötzmann Octect and the Art Ensemble Of Chicago. The musicians sound like an amalgam of these two but bring themselves to the party. For jazz in the Baltic, this record is an important historical artefact.