By GORDON MARSHALL
October 29, 2010
Sign in to view read count 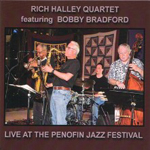 Tenor saxophonist Rich Halley gives the great cornetist, Bobby Bradford, the first solo on Live at the Penofin Jazz Festival, as well he should. Bradford is a veteran of the melodically oriented free jazz scene, going back to his days in the late '50s with Ornette Coleman, who is Halley's starting point. When Halley himself comes in on the number, "The Blue Rims," he doesn't so much come out of the woodwork as come out like the woodwork itself, something like a cross between the sassy, knotty Archie Shepp and the smooth grain of Lester Young. Live is full of surprises and edgy, angular twists and turns.

"Streets Below" out-funks even Coleman's Prime Time—and it's hot, with polyphony like Louis Armstrong's Hot Fives and Sevens. All these lateral references might suggest pastiche, but Halley is a scary student of the jazz game, so it all comes out as earthy as—well, the earth itself: the earth and air that are implied by the other two titles on the album, "Grey Stones/Shards of Sky" and "The River's Edge is Ice." Halley's unit, a quartet with his son, Carson Halley, on drums, and Clyde Reed on bass, is hard, cohesive and spare.

"Grey Stones/Shards of Sky" is a roller coaster free-for-all. However dangerous, everything is under control. Carson in particular helms the outing with a funky military style beat, as if George Clinton were doing Sousa. There are lots of tempo and time-signature shifts, but the flow is so even-keeled it feels like just a particularly heavy and regular swing. The four cuts are long, but again, they are effortless and go by like a swift sailing boat on its respective tacks across the bay, which can be imagined as San Francisco's, as Halley hails from just north of there.

"The River's Edge is Ice" is another funk-laced number, reminiscent of The Art Ensemble Of Chicago's "Dreaming of the Master," from Nice Guys (ECM, 1979)—a tribute to Charles Mingus. Halley's number combines the AEC's controlled chaos with Mingus' passionate humor of the soul—again, seamlessly. Halley is clearly a master, and versed in music theory. If he keeps engendering thoughts of other artists, and waxes poetic, it is because he has so artfully hidden his art. This is poetry for the inner ear.

The Blue Rims; Streets Below; Grey Stones / Shards of Sky; The River's Edge is Ice.