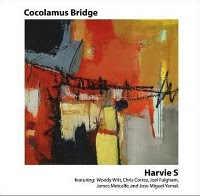 The re-imagining of a traditional Irish ballad, "Eili Gheal Chiuin," does more than define the breathtaking skills of bassist Harvie S, as he takes wing on Cocolamus Bridge. It sets him apart as one of the very few virtuoso bassists of today. He has courage way beyond the narrow definition of the word, and has a fecund mind that is continually searching for new horizons towards which to stretch, taking with him a bass violin that sings with almost limitless possibilities. As unique as the solo bass choir of the Irish folk ballad is, it is just one facet of S' staggering talent: that of the unbridled soloist; making his bass sing with almost human facility is another.

Perhaps S gets that from his years in a duo role with legendary vocalist Sheila Jordan. It was, after all, Jordan who all but drove the bassist to play twin to her soaring bebop vocals. On "Cocolamus Bridge" the bassist provides a brilliant showcase of the voice-like sound of his instrument, which he explores in almost every tenor possible. He imagines lines that make great leaps across the soundscape, darting this way and that, zigzagging and flying in colorful whorls, and sometimes he underlines the harmony with a gravitas that recalls Charlie Haden's thunderously stuttering pizzicato. Like Haden, he makes the strongest showing in the very simplicity of his harmonic approach to the art of the song.

Harvie S can also undertake a complex course in the music. He plays a dramatic, contrapuntal role in "Courage," a decidedly abstract piece that seems to race along in the beginning almost as if it was mimicking a militaristic charge, while in "Coco Loco," he is puckish, prancing about the tune with child-like abandon. The triads that dapple his rendition of Wayne Shorter's "Night Dreamer"—not as close to the original as it might appear—especially in the solo, dart off from the beginning of a solo line that is brilliantly followed by dark notes in the low register of his bass, as he growls and grunts his way through the piece's edgy mood in tonal counterpoint to the shrill meandering of Woody Witt's soprano saxophone.

"To Bea" is a delightful and spritely dedication to Harvie S' mother, and features the bassist dancing around the piano line as he builds up towards a harmonically rich solo. This is followed by the guitar down low, as it is heard so often on the album. But the song has a Bossa Nova slant, and here, S shows his grasp of the swaggering rhythm, as does the percussionist on the date, James Metcalfe. "Ike (Take a Hike)" is inclined towards the Afro-Cuban danzon, but displays a similar shuffle as the song dedicated to the bassist's mother, before "Time and Beauty" returns the music back towards the abstract.