Hal Galper And the Youngbloods: Live At The Cota Jazz Festival 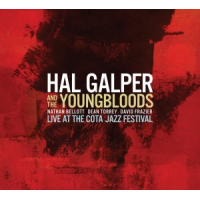 The trio recordings released by pianist Hal Galper between 2006 and 2014—six discs, all but one on Origin Records—plowed fresh ground. Each disc dug deeply into the "Rubato" form. Taken as a whole—from 2006's Agents Of Change (Fabola Records) through 2014's O's Time (Origin Records)—the full series represents a monumental, sharply focused project that, for those who listened, redefined the piano trio.

Live At The Cota Jazz Festival features Galper still riding the wave of a fifty year-plus career that has  included serious mainstream work with trumpeter Chet Baker and alto saxophonists Phil Woods and Cannonball Adderley. Now he has a new group, the Youngbloods, a new generation of musicians whom Galper encountered originally as his students at the Purchase Conservatory.

"Freewheeling" is a word meant for this sound. No one's keeping time; everyone's keeping time (in their own fashion); and time here is a concept relative to each player. Run that one by Einstein.

Bassist Dean Torrey and drummer David Frazier craft jumbled rhythmic landscapes, while addition of another melodic voice to Galper's trio concept—in this case alto saxophonist Nathan Bellott—opens up new paths through a labyrinthine trail system. Bellott's tone is tart, Jackie McLean-esque. His approach is confident to the point of audaciousness. Jazz thrives on audaciousness. And in the middle of it all, Hal Galper pushes his concept of brimming-with-surprises rubato piano artistry ahead. Still innovating after all these years.