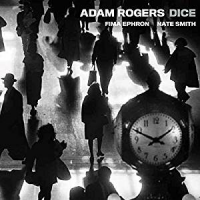 At some point in time, fusion lost its way. Some say it never really had a firm enough direction, existing only as a symbol of excess, power, and virtuosity to begin with. But those steeped in '70s and early '80s music of this sort know the truth: A perfect blend of rip-roaring lines, one-step-beyond melodicism, feats of daring, and mind-bending grooves took the music to great heights in its first decade, bringing it to a point that's never been equaled or duplicated since.

Instead of living on as a celebration of stylistic convergence and unity, fusion became a dirty word in the decades that followed, disdained by a growing faction of purists, muddied by those who put complexity and athleticism above accessibility, and muddled by those who never really heard the message the right way in the first place. But all is not lost. Guitarist Adam Rogers has delivered DICE, reminding us about the virtues of this much-maligned music while extending it into a new realm of his own creation.

While the aforementioned setup clearly focuses on a specific style of music, the truth is that it doesn't really matter what you call this. Fusion for modernists, post-modern groove art, and electro-hypno jazz are all perfectly fine descriptors that say enough without really saying anything at all. Words just don't suffice. You simply have to hear this to really get it. Rogers, bassist Fima Ephron, and drummer Nate Smith bring their long history together to bear through aggressive gestures, flowing grooves, trippy asides, and searing solos. If the name "Trio of Doom" wasn't already taken, these guys could've owned it, bar none.

While Rogers' position as one of the finest guitarists in the land was established quite some time ago, DICE makes it clear that he's not one to rest on his laurels. With "L The Bruce" Rogers brings a quirky sensibility in line with tight rhythmic choreography, on "Flava" he assaults the senses, through "Elephant" he combines slick lines and mind-blowing technique, and during a trip through the Patsy Cline-associated "Crazy" he puts the big guns away and focuses on the unvarnished beauty of the song as seen through a glassy prism. On one track Rogers might be delivering the solo to end all solos, but on another he might be boiling down the essence of Mississippi Fred McDowell into a melodically engaging, six-minute spiritual raga. You don't know what you're going to get from Adam Rogers from one moment or song to the next, but you know it's going to be something.

There are many points on the album where production work and overdubs add greatly to the mix—the use of samples and loops to thicken the surroundings, a complementary glaze painted atop a trio romp, the underwater additions to "Sea Miner"—but those enhancements shouldn't take away from the raw truths surrounding these three. When you look past all of that, what remains is an incredibly sophisticated power-and-pocket trio that's as intelligent as it is muscular. DICE, not surprisingly, delivers on every level.