Lady K and the Kings of Swing featuring Dale Head: Live at the Blackhawk 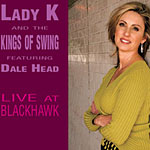 An album of show tunes and film songs is not necessarily a bad thing, and when the music is performed with finesse and a certain pizzazz, it can be downright enjoyable. This certainly is the case with Lady K and The Kings of Swing Live at the Blackhawk. The big band is based on the West Coast and is directed by its tenor saxophonist and flutist, Kaye Leedham. However, Leedham is gracious, maintaining that this is an ensemble effort, and indeed it is.

The band plays, on this debut album, sleek and svelte arrangements from the playbooks of arrangers such as Sammy Nestico, Quincy Jones and Nelson Riddle. Some of the arrangements have been adapted by arrangers working with the band. No matter; the performances are wonderful, mature and delightfully swinging. Although it would be unfair to single out any of the personnel, as most of the playing is evenly good, John DeBoer is exceptional on trumpet, especially on "Shiny Stockings" and "Love for Sale." The late Art Dougherty, the alto saxophonist who passed away before the release of the album, will also be fondly remembered for his solo on "Body and Soul." His great leaps and wild swinging across registers are beautiful and sometimes reminiscent of Johnny Hodges.

Vocalist Dale Head is featured on several tracks. Head is a fine tenor, who channels Frank Sinatra off and on throughout the performance, but also has a deeply emotional voice of his own. He swoops on lyrics like a great bird in flight, bringing dynamic situations to life. His phrasing is extraordinary and his intonation wonderful. Occasionally, however, Head may get a tad carried away and mimic a little Lucie Arnaz, which seems out of place. However, the vocalist adds a powerful dimension to a fine group of musicians.

The fact that music like this has to be self-produced is deplorable. There are few repertory big bands performing today and a band that is able to secure a live date and put out a record deserves considerable credit. The question is where they would go next. With the musical skills on display here, perhaps there is a case for exploring material from the books of musicians who have truly created a path for swing—men such as Duke Ellington and Count Basie, to name just two. But then again, that may just be on the agenda...who knows?

All Right OK, You Win; My Favorite Things; My Foolish Heart; Come Fly With Me; Luck Be a Lady Tonight; Love Walked Right In; The Bare Necessities; Every Day I Have the Blues; I've Got You Under My Skin; I Can't Stop Loving You; Love for Sale; Pennies from Heaven; Where or When; You'd Be So Nice to Come Home To; Shiny Stockings; Body and Soul; How High the Moon.