By JOHN KELMAN
December 4, 2009
Sign in to view read count 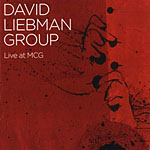 It may not possess the same visibility as other longstanding groups like the Dave Holland Quintet or Oregon, and saxophonist Dave Liebman's Group hasn't completely avoided flux. Marko Marcinko replaced drummer Jamey Haddad a few years back, and Phil Markowitz's departure trimmed the group from a quintet to a quartet, even though the keyboardist continues collaborating with Liebman to this day, most recently on Saxophone Summit's Seraphic Light (Telarc, 2008). Bassist Tony Marino and guitarist Vic Juris remain to this day, contributing to David Liebman Group's reputation as one of the most thrilling live groups going.

Making Live at MCG—a 1995 live performance from the heralded Pittsburgh organization's archives—all the more important a find. Studio efforts including Conversation (Sunnyside, 2003) and Blues All Ways (OmniTone, 2007) are excellent, to be sure, but this is a group best heard live. Liebman's quintet—with one foot in the tradition, the other in the future—can swing like mad, but isn't afraid to head into higher octane fusion territory—after all, Liebman played with Miles Davisduring his most extreme mid-1970s electric years.

Two Markowitz originals, two Liebman compositions, and two well-known standards provide plenty of space for everyone to stretch out. Bringing his tenor back in recent years, at this time Liebman was still focusing on a soprano voice that remains one of jazz's most original since the death of John Coltrane. Markowitz's reputation is as a pianist, but here, on his high energy "Cut," he delivers a synth solo as compelling as any from the usual suspects, and an opening piano solo on "Mine Is Yours" that references Chick Corea, but with a less percussive touch. Juris, as ever, proves a distinctive yet chameleon-like player who capitalizes on all the strengths of contemporaries including Pat Metheny, John Scofield, Bill Frisell, and John Abercrombie, but with a few twists of his own. His solo on "Cut" is a marvel of construction, combining bluesy bends, lithe bop lines, and textural energy to make it a highlight on an album filled with them.

Liebman reharmonizes "Maiden Voyage," its harmonic ambiguity mirroring Herbie Hancock's solo on the 1964 original, while Miles Davis' "All Blues" gets reworked into 11/4. The saxophonist goes partially pan-cultural on his "Beyond the Line," with Haddad's Hadgini udu drum intro, but ultimately shifts into a buoyant, mid-tempo space to feature both himself and Juris. Haddad's udu drum returns on "New Age" and, alongside Liebman's wooden flute, heads back into similar territory, but the sophisticated voicings of Liebman's dark changes belie the world references. Marino—a creative acoustic bassist here, but an equally vital electric one elsewhere in the set—delivers a set-defining solo, while Liebman's expressionist tendencies remain well-suited to the music without breaching excess; always as rich in structure and content as they are visceral in energy.

65 minutes later, Live at MCG affirms that this group can play anything. In a fusion mood perhaps—albeit one that speaks in the broadest terms—David Liebman Group combines a plethora of cross-stylistic, pan-cultural interests into a singular, transcendent and incendiary whole.

Maiden Voyage; Cut; All Blues; Mine Is Yours; Beyond the Line; New Age.