By Mark Corroto
September 22, 2009
Sign in to view read count 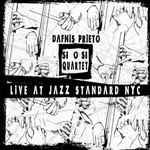 Here is a mature player and composer. This 30-something musician was born in Cuba, only moving to New York ten years ago. His meteoric rise has found him in great company, recording with Steve Coleman, Bebo Valdes, Jane Bunnett, Arturo O'Farrill, and D.D. Jackson, to name just a few.

Like other recent Jazz Standard live dates, this outing has excellent acoustics. Prieto's Si o Si Quartet is rounded out by bassist Charles Flores, who wields both acoustic and electric basses without distracting the mix. In fact, a few tunes utilize melodica, a peculiar handheld keyboard that is both fingered and blown into. Creating a pseudo-electronic sound on "Seven By Seven" adds both old world and new sounds to the date. The wash of acoustic synth-sound fits perfectly well with Flores' woody acoustic bass solo, as Prieto accents and comments with his cymbals and tom-toms. His perpetual (but prudent) energy propels these tracks ever onward with a comment, aside, and obiter dictum.

All the tracks were composed by Prieto, and he exhibits both his Afro-Cuban roots and a passion for modern jazz. "Ilu-Uli" could be mistaken for a Herbie Hancock piece, with its percussive thrust—that is, if Hancock was Cuban. Prieto, like Hancock, loves the quick changes of tempo and memorable melody. He can write a ballad, too; "Just Go" is both tenderhearted and determined. After Valera opens with a heartfelt simple few measures, Apfelbaum summons some dark tracings over Valera's eerie melodica, all to great affect.

The disc ends with Prieto's sung (reminiscent of Indian music) introduction to "Trio Absolute." The band, minus Apfelbaum, then tears into a hammering finale, full of percussive revelry and exuberance.