Maximize your visibility at All About Jazz by upgrading your musician page from standard to premium. With it, you'll receive All About Jazz home page exposure, a highly stylized / ad-free musician page with bonus features and benefits, an ad, plus you control where you sell your music and so much more.
Learn More
226

BY JEFF STOCKTON
December 11, 2009
Sign in to view read count 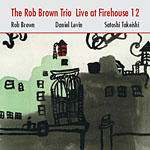 Alto saxophonist Rob Brown has the lean physique and worried forehead of a typical free jazz improviser, but through his associations with the leading forces of the downtown scene (including Matthew Shipp and, most fruitfully, William Parker) he has positioned himself as an in-demand sideman as well as a creative and ear-catching leader. He has been a mainstay in the groups put together by Parker and has arguably done his most intensely impressive work with the Quartet, as well as bringing a distinctive voice to the Little Huey Orchestra. Brown's art continues to move forward.

Nothing could be further from Little Huey than Brown's Sounds trio (with Daniel Levin on cello and percussionist Satoshi Takeishi). Brown's band mates are masters of small gestures, which make their virtuosic flourishes all the more dramatic. Recorded live at Firehouse 12 in New Haven, Connecticut, Brown's tone is forceful and controlled even when his energy sends him on the attack. Takeishi rattles his bones and his drums can sound flat and arid, but they can also roll and tumble like a sack of oranges that has been spilled down a grassy hill. At the center of the triangle is Levin, plucking the strings on his cello, as stalwart as any double-bass; plinking the strings in out-of-time duet with Takeishi or sawing the strings in screeching support of Brown's alto.

Comprised of four Brown originals, the opening "Quick Be Nimble" establishes the trio's interaction and individual dexterity, while the longer and discursive "Walkabout" demonstrates the band's rhythmic abilities. "On a Lark" is their most outside piece, moving from quiet introspection to effusive expressiveness, and "Stray(horn)" refers to Billy's famous Duke Ellingtonian ballads while making a convincing case for a treatment of Brown's compositions on a larger scale.

Quick Be Nimble; Walkabout; On a Lark; Stray(horn).