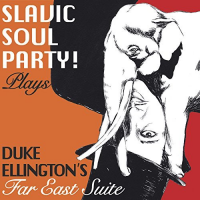 Simply put, Slavic Soul Party Plays Duke Ellington's Far East Suite is amazingly played and incredibly fun. SSP breathes abundant life into each tune, pulling out threads from Ellington's original tunes and reweaving them into vibrant and colorful new cloth, with the brass and reed soloists genuinely meeting the expertise and excitement of the Duke's original instrumentalists. There's tuba instead of bass, and accordion instead of keyboards or guitars, and yet they rock.

This party starts jumping from the "Tourist Point of View." Joyous tuba thumps out the bass line, the trumpet soloist blows hot jazz, and the brass section rises and falls in soundwaves which seem like great mountains slipping past your window as your train rumbles through someplace you've never been before. Collectively, the band sounds like one big throbbing, churning rhythm machine and, from just this one song, you can't believe they can maintain their pace. And then, through raveups such as "Depk" and the cinematic and hot "Blue Pepper," which sounds like the craziest parade you ever heard marching past in double time, they do.

Many other titles align with their sound. After rustling to awaken in rattling kettle pots, the "Bluebird of Dehli" rises and falls on trumpet wings while reeds dance and flutter like butterflies nearby. Trumpet and brass rise and fall with a Hebrew or Middle Eastern sound as if climbing up and down "Mount Harissa" (which is in Lebanon). As SSP rips through their arrangements of music Ellington wrote more than fifty years ago, what might seem anachronistic sounds so vital and energetic instead.

The Ellington Orchestra's Far East Suite tour never actually made it to the Far East. The US State Department cut the tour short and the band came home from Turkey on November 22, 1963, after the assassination of US President Kennedy.