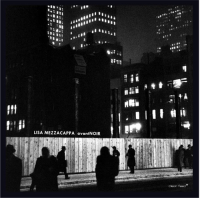 The underlying story for this album by West Coast bassist, composer and improviser, Lisa Mezzacappa emanates from her fascination with Paul Auster's New York Trilogy, Dashiell Hammett's crime stories and similar literary works. Hence, the program casts a visual of nighttime in an intimidating metropolis. Toss in several progressive jazz motifs that parallel an action-packed detective thriller or several instances of zany comedic inferences and you have an album that lives by a platform of diversity amid a host of intriguing concepts. With samples and electronics, appended to a traditional small ensemble jazz lineup, the music traverses through many routes or dark passageways, contrasted by a fun-factor often built on alternating motifs, kooky effects, hardcore improv and an oscillating rhythmic paradigm.

It's a very compelling endeavor that parlays a classic black & white noir premise. Here, Mezzacappa's seriously complex and perpetually moving compositions tender cartoon-ish movements, pathos and straightforward jazz-based frameworks along with bizarre electronics mechanisms supplied by Tim Perkis. The final track "Peter Stillman in Riverside Park, C 1986 -Babel," is a demanding composition that starts with a faded voiceover, Aaron Bennett's soft tenor sax phrasings and John Finkbeiner's volume control techniques. Ultimately, the musicians are building a sense of anticipation for what looms ahead, tinted by William Winant's dainty vibes work. But the bassist helps push the beat with her succinct lines as the band kicks matters into a higher gear via bouncy unison choruses and Perkis' gurgling synth treatments, leading to false endings, grooving rock pulses and Bennett's muscular soloing. They rev it up towards the coda as the whirlwind ride comes to an end, like the finale of a movielike murder mystery. Indeed, it's a visionary and shrewd game-plan that succeeds on all levels.