BY BRUCE LINDSAY
December 6, 2014
Sign in to view read count 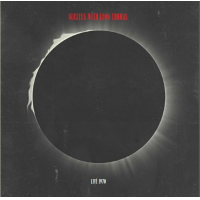 Combine a British jazz-rock outfit with an American vocalist. Put them on stage at the 1970 Montreux Jazz Festival. Record the gig, pop the tapes in a safe place for over 40 years, then give them to the talented team at Gearbox Records. The result is Live 1970, by Nucleus With Leon Thomas, a beautifully produced, lavishly packaged, vinyl double album that invokes feelings of nostalgia and puzzlement alike.

Nostalgia? For those who were there—not necessarily at Montreux, just around the scene in 1970. Puzzlement? For those who weren't there, who might wonder at this strange collusion—a vocalist who mixed spirituality and a strident anti-Vietnam War stance with a propensity to yodel in a "Frank Ifield meets Tommy Cooper" style, backed by a bunch of up-and-coming jazz-rockers.

This was not a long-term relationship. Thomas played at London's Ronnie Scott's Club in early June and Nucleus worked as his backing band. Nucleus was at Montreux to play—and eventually win—the international jazz band contest. So Thomas and the band joined forces once more, just a few days after Ronnie's.

The Montreux Jazz Festival wasn't limited to jazz acts—in 1970 Carlos Santana and British blues bands Stone The Crows and Chicken Shack played alongside Bill Evans and Yusef Lateef. Nucleus and Thomas delivered a program that included the spiritual sound of "The Creator Has A Master Plan," the snaking groove of "Echoes" and the classic R&B of "Chains Of Love."

This album gives Nucleus top billing, but only Thomas' name appeared on the festival's poster. On "The Journey" he introduces "The Nucleus" using their first names only—giving the distinct impression that he was The Boss. Thomas seems to have kept things under control musically. The musicians get space to open out and solo, but without the self-indulgence that could overtake them at times on Nucleus' own albums.

Although Nucleus included key British jazzers and jazz rockers—trumpeter Ian Carr, drummer John Marshall and oboist Karl Jenkins (now one of the most popular classical composers on Earth)—the most emphatic instrumental contribution comes from guitarist Chris Spedding. His rhythm playing on "The Creator Has A Master Plan," which Thomas first recorded with Pharoah Sanders, is subtle and understated, on "Echoes" he's spiky and on "Damn 'Nam (Ain't Going To Viet Nam)" and "Chains Of Love" he lays down raunchy blues lines.

Thomas is an engaging singer, with a slight rawness to his voice that's especially effective on the bluesier tracks. His vocal on "Damn 'Nam (Ain't Going To Viet Nam)" is impassioned and honest, the lyrics direct. These blues tunes are rhythmically strong, thanks mainly to Marshall. Thomas' yodelling hasn't aged so well, coming across as something of a caricature, especially on the lengthy and lyric-free "The Journey." Despite this, Live 1970 is enjoyable: a glimpse into a collaboration that seems odd on paper, but made a certain kind of sense on stage.