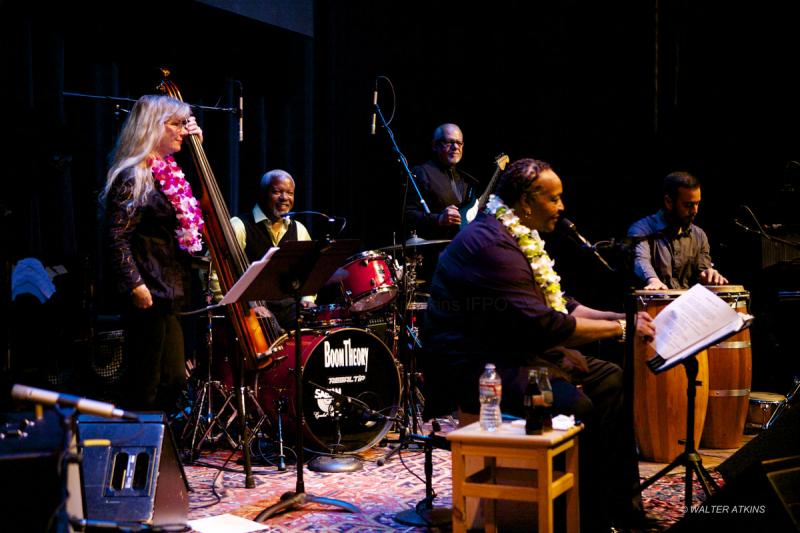 Seasoned San Francisco Bay Area vocalist Linda Tillery assembled a fine lineup of local musicians, including some decades old friends and a recent new one, to help celebrate her birthday and musical life. Tillery presented a diverse repertoire of blues, jazz, soul, folk and gospel to an over flowing venue of friends and family.

Just a few months earlier, Tillery was teaching at Jazz Camp in La Honda CA when she heard what she assumed to be a veteran blues guitarist. She could not believe Brett Bratnatt, a shy seventeen year old, was the source of the wondrous sounds. When she asked him why he played the blues, he simply replied, "he liked it." She was so impressed with the San Jose youngster's talent, she invited him to celebrate her 67th birthday on stage at the long running Freight and Salvage Coffee House in Berkeley.

The versatile vocalist and her teenaged guitarist then got comfortable in their chairs. Tillery sang and told interesting stories while the quiet Bratnatt alternated between electric and acoustic guitars for each tune. She opened with Keb' Mo''s 1994 composition "Am I Wrong." She added, "If you feel it, let it come out of you." With acoustic accompaniment, Tillery glided into the Reverend Gary Davis gospel song "I Heard The Angels Singin.'" Her next selection was Muddy Waters' intense "I Want You To Love Me." It was ..."reflective of desperate love" and "loving desperately." Tlllery's rich voice was clear and emotive and the FS crowd was captivated.

During the set, Tillery asked her youthful guitarist if he was an "aberration of nature." On the Professor Longhair number "Tippitina," the packed place clapped and tapped its feet to the music. Tillery played a cajon with brushes on another tune. She threw in a rift from the Beatles' 1963 "I Saw Her Standing There." The celebrated singer performed the traditional hymn "Will The Circle Be Unbroken" with acoustic support by Bratnatt while the audience softly sang and clapped. During the song, Tillery said of her guitarist, "He's so shy he won't take two choruses."

At the break, one of the thrilled customers told her friend that Tillery's ..."wealth of cultural material was wide ranging and ...it's just amazing." When Tillery and the full band came out to start the second session, all the ladies wore fresh Hawaiian leis. She talked about growing up in the City's Fillmore and asked if there were any Lowell High School people in the house. About a half dozen people, including this photojournalist, put their hand up. The vocalist/percussionist asked the Lowellites to meet in the lobby after the show for some group photos.

She introduced one of her "favorite guitarists" and old friend Ray Obiedo. "Known him 40 -45 years and he played great jazz in the 80s...funky stinky guitarist," she said. Tillery had known bassist Davies for about 20 years. Tillery said she wasn't influenced by the greats like Aretha Franklin. Her influences were local artists like Lady Bianca who was also in attendance. She added no one gets there alone and there are a few originals like Leon Joyce Jr. "This guy is clean and always on time" she announced.

Tillery kicked off the second half with Gil Scott-Heron's memorable jazzy "Lady Day and John Coltrane." Obiedo's guitar and Davies' bass formed the ideal foundation for her lush deep vocals to work. Hall stretched out on this fast paced number. Growing up in the 60s with "music of resistance" she said, "most people think of Joan Baez , Bob Dylan or Crosby Stills & Nash." She thought of Nina Simone. Tillery responded to a crowd comment with "Are you from Oakland?" and received a roar from the room. Tonight, she addressed the Viet Nam War and social issues with music from African American composers. Davies was asked to play the bass line from Marvin Gaye's 1971 classic "Inner City Blues." The guitar and percussion solos here were splendid.

After performing Simone's powerful "Mississippi Goddamn" with its driving pace and social sting, someone nearby said "Nailed it." Her ringing cover of the Richie Havens/Lou Gossett track "Handsome Johnny" was propelled by Obiedo's guitar, Joyce Jr.'s drums and Navarett 's percussion. Hall and Davies came in later to provide for a strong finish. Tillery brought the beat down for the conga solo and drums. The multiple rhythms brought the song home while she played the cajon.


Bill Withers' poignant "I Can't Write Left Handed" about an injured soldier, was a tribute to the sacrifice and courage of loved ones lost in Viet Nam. Obiedo's eerie tone added texture to the Withers song. Billy Taylor's "His Name Was Martin" featured Hall and Davies. Hall's piano intro was hauntingly beautiful. Tillery closed her eyes and swayed quietly to the music.

Tillery jokingly said she was "thinking of moving to Berkeley..." but changed her mind after crowd comments. She told another tantalizing story about herself. Since she was a Virgo, she "must clean and organize." If her cat had a few hairs out of place, she would brush it. Someone yelled, "Happy Birthday—you are a treasure!" The jubilant room agreed with the proclamation.

According to Tillery, James Brown wrote protest songs, but you didn't always understand him. The birthday vocalist segued into a funky JB groove with his "I Don't Want Nobody To Give Me Nothin" with Obiedo rolling on guitar. She counted off the song eight times then sixteen more with a JB wail. Navarett added a distinctive wooden stick slapping sound with his voice. Aisles and seats were full of dancers enjoying the music.

Tillery added her moving version of Ben E. King's timeless 1961 hit "Stand By Me." "Stand," one of my favorites, was well received by the listeners. Tillery made her birthday a real Friends and Family Affair by inviting family members and musical friends on stage to sing "Happy Birthday" and enjoy the merry moment with her.

After the festive set, Tillery shared chocolate and carrot cake with her many admirers. East Bay educator and vocalist Marina Crouse commented about the exciting evening with "Loved it. It was intimate and genuine. She (Tillery) has a natural art for story telling. You felt like you were in a secret club of loved ones."