Reverend Gary Davis was simply one of the finest finger-pickers ever to play a guitar, a leading practitioner of the ragtime-imbued Piedmont school of blues. A vital source of early ragtime and country blues guitar, his innovative style reached beyond his time-frame, as a key influence for many folk and blues musicians of the ‘60’s.

Born in 1896 in South Carolina, Gary Davis remained blind due to an accident while still a baby. Another accident later on in life left him with a broken wrist that never healed properly, and this might be the reason for his peculiar swinging finger-style guitar technique (Davis used his ‘Miss Gibson,’ large six-string guitar, tuned to an unusual E-B-G-D-A-E configuration that provided him with a more complex set of chords).

He became a street musician in his native South Carolina where his guitar playing greatly impressed his contemporaries. He made his first solo recordings in 1935, 15 selections that were a mixture of blues and spirituals for the American Record Company. Davis, who became an ordained minister in 1937 and a street singer in New York in the early 1940s, did not re-enter the recording studios until 1954 when he made an album for Stinson. Those early sides are available on the Document label as "The Vintage Recordings" (1935-1949)

“Gospel, Blues and Street Songs,” is a 1956 recording for Riverside which gained some notice, by the time Davis recorded “Harlem Street Singer” in 1960, he was being rediscovered by the folk and blues revival movements. 1964’s “The Guitar and Banjo of Rev. Gary Davis,” is a rare instrumental album featuring Davis mostly on guitar (including his versions of “The Maple Leaf Rag,” “Slow Drag,” and “Fast Fox Trot”) plus two songs on banjo and one on harmonica.

His strong faith helped him cope with blindness, and in 1933 he was ordained as minister of the Free Baptist Connection Church in Washington, North Carolina. For years he toured as a singing gospel preacher, keeping away from blues. For the last 30 years of his life, Davis was blessed by doing the much wished-for: teach, preach and sing. It was not unusual to have his church with him on his performances and to have his audience attending his sermons.

All through the ‘60s Davis performed at folk festivals around the country, including the Newport Folk Festival and the Philadelphia Folk Festival. His fame ultimately increased to the point that he was asked to tour Europe.

Rev. Gary Davis was very active up until the time of his 1972 death. Even today, few blues guitarists can match his intensity, passion, and sincerity. Show less 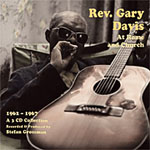 At Home and At Church...

The Guitar and Banjo...

All About Jazz musician pages are maintained by musicians, publicists and trusted members like you. Interested? Tell us why you would like to improve the Reverend Gary Davis musician page.