By GLENN ASTARITA
December 2, 2016
Sign in to view read count 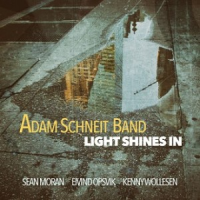 For several years, saxophonist Adam Schneit has been making the rounds as a first-call sideman other than co-leading Old Time Musketry and this talented quartet, instilled with his impressive compositional skills. Here, the musicians' venture into the outside realm while dishing out more conventional fare during various phases or movements. For example, the opener "A Clearer View," is erected with a laid-back groove and a cordial primary theme anchored by Eivind Opsvik's booming bass lines and drummer Kenny Wolleson's steady beats. But the follow-up "Different Times," cast a different outlook as the musicians project an open-season frame of mind on the jazz vernacular, teeming with rolling cadences and electric guitarist Sean Moran's seething fireworks. Moreover, Schneit's ricocheting notes lead a boisterous sequence of meltdowns along with the customary tension and release activities.

Several movements involve linear phrasings, pumping rhythms and intense group interplay, but matters never get out of hand. Indeed, it's a diverse set as Schneit picks up the clarinet on the solemn jazz-dirge like "Hope for Something More," dappled by Wolleson's dark shadings and accents, elevated by a gutsy bridge section. Yet the complex free-bop piece "My Secret Hobby" projects a 360-degree turnaround, where the quartet executes a fluid, power-packed opus, featuring the guitarist's hardcore licks and the leader's torrid sax soloing. Toss in a few reconstruction passages and Wolleson's swarming patterns, and you have a track that keeps you on the edge from start to finish. Simply put, Schneit's quartet possesses the ammo and guile to be a significant force within global jazz circles.