By Roger Farbey
December 4, 2017
Sign in to view read count 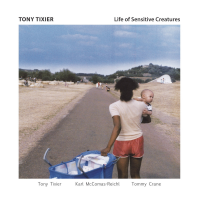 Following two semi-pastoral Tony Tixier originals, "I Remember The Time Of Plenty" and "Denial Of Love," the listener is treated to a commendably loose interpretation of Louis Armstrong's timeless "Tight Like This," which apparently Tixier's grandmother enjoyed singing. Whilst it retains some of the hooks of the 1920's tune, it is transformed into something completely different. The album follows a similar pattern to the above tracks, variously populated by dulcet or forceful numbers. "Illusion" manages to combine both of these elements, undoubtedly benefitting from Tommy Crane's crisp percussion.

But there are also more muscular tunes which include "Blind Jealousy Of A Paranoid" and the equally vibrant "Home At Last" with a robust pizzicato bass solo from Karl McComas-Reichl. Of the remaining non-originals, Stevie Wonder's "Isn't She Lovely" is given an unquestionably elegant treatment and Jimmy Van Heusen's sublime "Darn That Dream" is the epitome of restrained subtlety.

Tixier, whose formal classical piano lessons commenced at the age of six, hails from Montreuil, a suburb of Paris, France. He moved to New York City in 2012 and subsequently settled in Los Angeles. This is Tixier's fifth album as leader and it's a good one. Whilst clearly influenced by Keith Jarrett and Herbie Hancock Tixier evinces his own musical vocabulary and florid style and in conjunction with his talented sidemen has produced a really irresistible set.

I Remember The Time Of Plenty; Denial Of Love; Tight Like This; Illusion; Home At Last; Calling Into Question; Darn That Dream; Blind Jealousy Of A Paranoid; Isn't She Lovely; Causeless Cowards; Flow.