By Karl Ackermann
December 4, 2017
Sign in to view read count 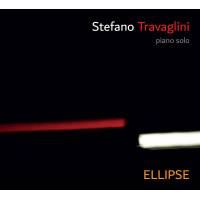 Italy's Stefano Travaglini—primarily a composer and pianist—is wildly diverse as an instrumentalist and composer. He has performed on oboe and bass guitar, studied with Estonian composer Arvo Part and American jazz and classical composer Vince Mendoza. Touring throughout four continents, Travaglini has demonstrated impressive proficiency in both jazz and classical genres though he is equally at home where categorizations aren't easily applied. A case in point is his debut album The Hungarian Songbook (Terre Sommerse, 2013); a collection of Eastern European and Gipsy folksongs arranged for voice and improvised piano.

Ellipse is a solo piano collection, recorded spontaneously, without edits or modifications. It can be classified as free improvisation but—as on the opening "The Importance of Fishing"—abstraction and lyricism coexist nicely. The 1928 song "Softly, as in a Morning Sunrise" by Sigmund Romberg and Oscar Hammerstein II was originally composed as a dance piece, but in most of its many jazz forms, has been greatly modified. Travaglini's interpretation is unique in its mix of staccato notes and nonlinear improvisation. "Monk's Mood" is also covered as the first part of a medley with Travaglini's own "Presences." The pianist treats Thelonius Monk with due respect even while occasionally infusing the ballad rendition with a more aggressive attitude. "Looking Back" and the closing piece, "Good Bye, for Now" are beautifully expressive and more structured.

Travaglini improvises as if having previously immersed his mind in a written version of the same piece. On Ellipse, the spontaneous creations, the melodies and passages, all hang together as if part of a well-planned narrative. Since he quotes the zen-like philosophy of Lee Konitz with "That's my way of preparation—to not be prepared" we can assume that the structures we hear are being developed in real time. Ellipse is a terrific solo piano recording; adventurous, but never over the top, and often quite beautiful.