By JAKOB BAEKGAARD
September 16, 2016
Sign in to view read count 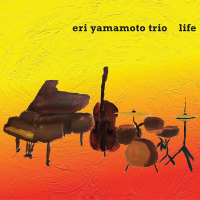 Tourist guides to jazz in New York often recommend the same venues like The Village Vanguard, Birdland and Blue Note, but there is a place known by true connoisseurs that should be the point of destination for everyone wanting to experience a real working trio with one of the most interesting pianists in contemporary jazz.

The place is called Arthur's Tavern and for a long time, Japanese-born pianist Eri Yamamoto has played there, and developed her musical language with soul mates, drummer Ikuo Takeuchi, and bassist, David Ambrosio. They have played together for more than twelve years and still have a lot more to say.

Their latest release together is called Life and is a recording from Michael Marciano's acclaimed Systems Two Studio in Brooklyn, but true to the spirit of the live experience of the trio, the music has been divided into two sets, each with seven compositions, all originals by Yamamoto.

In the brief, but beautiful notes, Yamamoto comments on the compositions and she mentions that the tune "New York Time" was inspired by the feeling of getting back to the vibrant big city after visiting her quiet hometown in Japan. In a way, the meeting between the quiet hometown and the big city is an apt metaphor for the music, which is like a cherry blossom tree growing up in the concrete of an urban environment. The album both captures the endless movement of a sea of people moving by and the meditative moment where time just seem to stop and the awareness of nature becomes a sign of the gift that is life.

The music moves from medium tempo to more reflective moments, but whether Yamamoto plays fast or slow there is lucidity in the way she lets the lines dance across the tangents, moving from the clear, sparkling waters of "Stars" to the slow, melancholy beauty of "Half Moon," an often requested favorite from the trio's repertoire.

Throughout the album, Takeuchi, Ambrosio and Yamamoto are in constant and close interaction and the sheer easiness and depth of their dialog is a thing to treasure, like having a good talk with a friend about the joys and sorrows of a day gone by. Life is not music detached from existence, but born out of it.