By Mark Barnett
September 16, 2016
Sign in to view read count 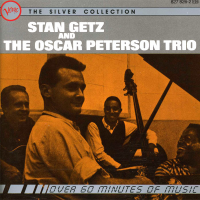 Saxophonist Stan Getz shines in this disc, recorded early in his career with top-flight musicians who created a perfect setting for his skills and sensitivity. Give him an "A" in "Plays well with others."

Like Zoot Sims (see If I'm Lucky in this "Getting Into Jazz" series), Stan Getz played tenor sax in the light, laid back, "cool" style originated by Lester Young. Getz's hallmark was his uniquely creamy tone, even more gentle than Sims.' His notes seem to float over the rhythm section like a leaf gently bobbing in a stream. He was also partial to the instrument's upper register, which enhances the delicacy of the sound. And yet you'll notice that his music doesn't just hang in the air. It has an intensity, an emotional drive that he delivers consistently, whatever the tempo. Getz was also a remarkable improviser, creating new melodic lines from even the most well-worn warhorse of a song.

Like Sims, Getz had a long and prolific recording career that spanned the 1950s to the 1980's. Unlike Sims, his playing changed significantly over the years, some of his later work more hard-edged and pyrotechnical. This CD, Stan Getz and the Oscar Peterson Trio, recorded in 1957, showcases the very best of early Getz. He seems to have a joyful, musically sympathetic bond with the other musicians (Peterson on piano, Herb Ellis on guitar, Ray Brown on bass), and it shows in the music.

One of the best known American popular songs, "Pennies from Heaven" was first sung by Bing Crosby in a 1936 movie of the same name. If you're not familiar with "Pennies" (or even if you are), try listening first to the Frank Sinatra version arranged by Nelson Riddle.

The Getz version on this CD is a wonderful example of his ability to improvise almost endlessly on a basic melody, and do it honestly—which means no fillers and no repetitive phrases that serve only to fill space. The track opens with a straight rendition that showcases Getz's immaculate, gentle tone, the sound that a generation of tenor sax players have tried to emulate. At 0:57, he begins to improvise, and proceeds to give us almost three minutes of smoothly flowing invention. The ideas keep coming to him as he progresses through the solo, becoming more and more inventive as he goes along. As you listen to this extended improvisation, try to count the number of choruses of the song he plays. It's not easy, because they blend into each other without pause. See if you come up with the number eight.

At 3:45 a nice piano solo by Peterson, and then at 4:27 still another improvised chorus by Getz, followed by a straight closeout.

Written by Jimmy Dorsey and Paul Madeira in 1941, this song has an appealing melody and beautiful words. Try listening to Natalie Cole's version before you proceed.

The Getz rendition is showpiece of simplicity, much of it a gorgeous duet between just his sax and Herb Ellis' guitar. Getz opens by playing the melody straight and with great tenderness. You'll be naturally tempted to focus your attention on him, but listen closely to how the guitar fills in the spaces and complements what he's saying.

At 1:03 the bass quietly enters, and at 2:13 the piano comes in and Getz begins to improvise. Although he stays fairly close to the tune as written, you may find the variations he creates even more beautiful, more passionate than the original. At 3:10, a quiet, inventive guitar solo that closes at 3:36 with a series of descending notes. Notice how Getz listens and responds, quickly repeating the same cascade of notes as he begins his own solo. With that interchange, Getz and Ellis have defined musical rapport, simply and clearly. Getz closes things out by playing the melody straight (almost). From here to the end, listen to the interplay between his sax and Peterson's piano.

A seldom played little song by George and Ira Gershwin from the 1937 movie "Goldwyn Follies." You can get to know it by listening to Carmen McRea's rendition.

Getz starts by playing the tune straight and simple, and then at 1:27, almost before you notice, he slips seamlessly into improvisation. His approach to this song is light, delicate, buoyant—no strain, just gliding along on top of the beat created by Peterson's trio. If "Pennies from Heaven" is the main course, this is the soufflé for dessert.

At 2:39, Peterson continues the mood with a simple, relaxed piano solo, and at 3:10 Getz is back with more improvisation. The closeout comes at 3:28 with Getz giving us the straight melody again.

Here's a little something special to listen for in this track. There's a part of the song, a series of notes that descends then rises, where the singer says, "I just sit and wonder if love isn't one big blunder." Getz seems fascinated by that musical phrase. It appears three times in the track, at 0:58, 2:09 and 3:20, and each time, even during the improvised part (2:09), you'll notice that he pauses to hit those notes straight and with exceptional delicacy. A nice touch.

This track is like an apple in a bushel of oranges, a gutsy, old-fashioned blues in the midst of laid back sophistication. Well, not quite. It's really an amalgam of cool and funky, with Getz and Peterson slipping effortlessly between the two styles. It opens with a guitar-bass duet in which Ellis gives us a full dose of country twang. He may have been a modern west-coast jazz musician for most of his life, but he grew up in Texas, and the western-bluesy part comes naturally. Not so naturally to Getz, but at 0:41 he blows a strong, passionate blues, slipping back every now and then to the cool phrasing he's used to. No, it's not pure old stuff, but the amalgam works. At 2:03 Peterson gives us a similar blend on the piano: a bit of stride, a bit of sophistication.

At 2:42, a strong bass solo, and then at 3:24, more blues improvisation by Getz. At 4:45 the track seems to be over, but it's not. What follows is a short, beautiful solo by Peterson to close things out.

I Want To Be Happy; Pennies From Heaven; Ballad Medley; I'm Glad There Is You; Tour's End; I Was Doing All Right; Bronx Blues; Three Little Words; Detour Ahead; Sunday; Blues For Herky.