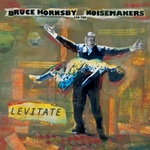 It is an oxymoronic but accurate statement that would describe Bruce Hornsby as a contemporary traditionalist. Traditionalist in the sense that his music is steeped in the heartland of America—a riverboat pianism with not only the blues, but also jazz and pop; a storyteller whose song vignettes portray the everyday lives of ordinary folk as heard in his many releases beginning with the multi-million selling debut album, The Way It Is (RCA, 1986). Yet he is a contemporary who is not stifled by the past or any idiom, whether performing a bluegrass version of Rick James' funky "Super Freak" on Ricky Skaggs & Bruce Hornsby (Legacy, 2007) or bopping true on John Coltrane's "Giant Steps" in the jazz trio release Camp Meeting (Legacy, 2007).

Levitate is Hornsby's eleventh release and projects the essence of what he calls the "joyful noise," his first recording with his longtime touring band, The Noisemakers. This debut on Verve, features 13 new songs, illuminating many of his diverse interests.

An outstanding pianist who can play comfortably in many genres, this release marks a "creative departure" for Hornsby with the music focused more on song and composition. This is reflected in "The Black Rats of London," a foot stomping tale with an American History lesson and "Prairie Dog Town," a delightful tune where the Noisemakers flex its muscle as Hornsby plays dulcimer. Both tracks are interlaced with humor, riveting music and thought-provoking lyrics.

Tracks such as "Cyclone," written by Robert Hunter of the Grateful Dead (with whom Hornsby was a part-time member from September 1990 to March 1992) are reminiscent of the pianist's earlier works. But the urban street vibe of the title song- -an alternate version taken from Hornsby's score of Spike Lee's film Kobe Doin' Work (a 2009 documentary on basketball star Kobe Bryant)—prove Hornsby's flexibility in keeping the music diverse.

Several of the tracks are taken from the score of Hornsby's first musical, SCKBSTD, where songs like "Michael Raphael" and "Paperboy" introduce eccentric stories and chromatic structures. Juxtaposed against these are rockers such as "Simple Prayer" and "Space Is The Place" (with hip-hop rap from Hornsby's twin sons, Russell and Keith, and a blistering solo from guitar great, Eric Clapton).

The recording ends with "In The Low Country" in what Hornby calls a "Southern slice of life," depicting the joys of NASCAR, WWE, good times and good people. Levitate might be considered a mixed bag but it does represents a diverse recording from this enduring songwriter, performer and composer.