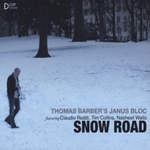 In ancient Roman mythology, Janus, the god of gates, doorways, beginnings and endings, was often depicted with two heads facing in opposite directions—one looking to the past, the other to the future—making him an appropriate signifier for music that embraces a range of historical traditions. Snow Road is the debut recording of trumpeter and recent Julliard graduate Thomas Barber's large ensemble Janus Bloc, whose episodic compositions reveal a plethora of stylistic antecedents, drawing from classical, jazz, and film scores.

Janus Bloc is the realization of a longstanding dream for Barber, combining the power of a big band, the intimacy of a small jazz combo, and the orchestral shading of a classical chamber ensemble into one versatile unit. Switching between genres and styles as effortlessly as it does arrangements, the 14 member band brings Barber's ideas to fruition with a cohesive sensibility that provides his labyrinthine compositions with a logical, if occasionally surprising, narrative flow.

Lead by Barber on trumpet, and featuring special guest appearances from trumpeter Claudio Roditi and vibraphonist Tim Collins, Barber's large ensemble consists of a horn sextet, a string quartet, and a three-piece rhythm section. They premier seven of the leader's intricate originals, followed by a regal interpretation of Duke Ellington's "Come Sunday."

In the liner notes, Barber admits a fondness for the sweeping grandeur of composer John Williams' film scores, an influence that arises periodically throughout the record, most notably on the bucolic nostalgia of "Song For Snow Road." Embracing similar cinematic vistas, the delicate jazz waltz "Elizabeth Rose" features an elegant solo turn by Roditi, with Collins contributing cascading variations to the contrapuntal 7/4 epic "The Mind Beneath."

Snow Road is an admirable first effort from the young Thomas Barber, a composer whose talent suggests great potential for the future.