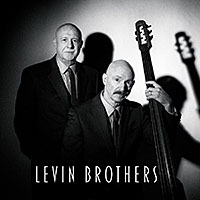 He may have ultimately become best-known in the progressive rock world for his ongoing work with King Crimson, Peter Gabriel, Stick Men and the Crimson ProjeKct, but 68 year-old bassist and stick player Tony Levin has no shortage of jazz credentials, playing with everyone from Gary Burton and Mike Mainieri to Chuck Mangione and Buddy Rich from the late '60s through the early '70s. Classically trained like his younger sibling, brother Pete has stayed more decidedly in the jazz world for most of his career, recording with everyone from Gil Evans and David Sanborn to Jimmy Giuffre and John Scofield and building a relatively small but substantive discography of his own including the appropriately titled Certified Organic (Self Produced, 2008). Still, he's not a total stranger to the world beyond, with an arrangement credit on the eponymous 1987 Geffen debut as a leader by The Band's Robbie Robertson and time spent on the road together with Tony in Paul Simon's touring band of the late 1970s.

Strange then, perhaps, that despite performing in each other's ensembles over the years it's taken this long to get the two brothers to co-lead a recording date. With the serendipity of the two now living just a quarter hour from one another in Woodstock, NY and Tony's recent acquisition of an NS electric cello for work with Peter Gabriel, however—alongside the open-mindedness of producer Scott Schorr, responsible for the more progressive leaning Levin Torn White (Lazy Bones, 2011) and even more impressive Levin Minnemann Rudess (Lazy Bones, 2013) that teamed the bassist with likeminded players including guitar soundscapist David Torn and Dream Theater keyboardist Jordan Rudess—it seems that the stars have finally aligned.

The result? A session of lithely swinging cool jazz that harkens back to the brothers' days listening to the music when they were growing up in the Boston suburbs of the 1950s and '60s.

The simply titled Levin Brothers says it all; with fifteen out of sixteen tracks co-written by the two siblings—who also co-produced the record alongside Schorr—the only compositional diversion is a take on King Crimson's balladic "Matte Kudesai," from Discipline (DGM Live, 1981), that fits the rest of the session like a glove, so heavily re-harmonized by Pete that Tony's delivery of the familiar melody on cello almost—almost—goes by unnoticed.

The core quintet includes the criminally overlooked David Spinozza—a guitarist who, despite being a busy session player in the 1970s with everyone from Charlie Mariano and Oliver Nelson to Paul McCartney and Donny Hathaway, has been largely absent in recent years barring occasional appearances such as Warren Bernhardt and drummer Steve Gadd. Gadd makes two guest appearances on Levin Brothers: first, on the opening, brush-driven swinger "Bassics," which features a knotty unison head from the Levins before opening up for individual solos from each of them; and again on the closing mid-tempo ballad "Fishy Takes a Walk," where Tony's cello arpeggios drive the tune until it, too, opens up to a more relaxed solo section that swings in a gentler fashion.

The rest of the session features the more-than-capable drummer Jeff Siegel and saxophonist Erik Lawrence, though a significant chunk of the album is a devoted to a drum-bolstered trio, placing primary emphasis on the two brothers. If there's a single touchstone for the recording it's Oscar Pettiford, the bassist and cellist whose double duty work was an inspiration to both brothers when they were growing up. While Levin Brothers is filled with short, memorable solos from all involved, the emphasis is on the word short; only "Matte Kudesai" approaches the five-minute mark, while a full 13 compositions don't crack the four-minute mark, making the album as much about the writing as it is about the playing, which is relaxed and simpatico throughout, but is particularly notable for the synchronicity of the two brothers. The overall tone of the session is cool but the reference points are many, from the Bach-inspired "I Got Your Bach," which harkens back to the Modern Jazz Quartet, to the more soul-drenched "Brothers"— one of six tracks where Pete moves from piano to organ.

It's an unassuming but ultimately engaging set that provides an opportunity to celebrate a lifetime of music from two brothers whose careers have gone to very different places while still crossing paths many times over the years...and who clearly remain close well into their senior years. Levin Brothers may not rattle any cages, but its relaxed ambience breathes friendship and family even as it pays tribute to the cool jazz that inspired both brothers at an early age and began two careers that may have diverged significantly over the years, but have not tarnished the inescapable bond shared by these two most musical of siblings.

Bassics; Brothers; Mysterioso; Not So Square Dance; Jumpin' Jammies; Cello in the Night; Havana; Special Delivery; I Got Your Bach; Matte Kudesai; Ostropolya; Gimme Some Scratch; I Remember; When Sasha Gets the Blues; Brookline Boyz; Fishy Takes a Walk.