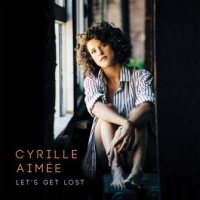 Vocalist Cyrille Aimee is the face of post-modernity. She is the eclectic intersection of French, Dominican, and Roma genes and cultures. The result is brilliantly polyglot, the beautiful blending of goodness. This whispering description could just as easily apply to Aimee's music. Let's Get Lost boasts the same eclectic origins as the singer. For this current recording, Aimee is backed by two guitars, bass and drums, accentuating a Gypsy element in the music chosen. Her repertoire is a dizzying array of Broadway, Folk, and jazz standards...a stylistic moving target that informs through creative miscibility rather than discreet definition.

Aimee is equally comfortable in Spanish (Juan Luis Guerra's "Estrellits Y Duendes") and French (Edith Piaf's "T'es Beau Tu Sais" and "Samois A Moi"). The presence and interaction of guitarists Adrien Moignard and Michael Valeanu lend the Gypsy-1920s sound to Aimee's treatments of "Three Little Words" and "Let's Get Lost." The singer surprises with Stephen Sondheim's "Live Alone and Like" and especially her take on Oscar Pettiford's "Laverne Walk," where Aimee scats her way across the latter half of the 20th Century. It Aimee's own composing talent is well represented in the angular "Nine More Minutes" and the duet with Matt Simons on "Each Day."