By David Rickert
December 29, 2012
Sign in to view read count 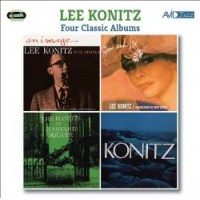 Besides being one of the few altoists that emerged in the 1950s that doesn't sound like Charlie Parker, Lee Konitz was a true musical adventurer whose explorations in free jazz, electronic instruments, and just all around anything goes sessions resulted in some of the most exciting music that came out of the fifties and beyond. His playing, which is marked by a detachment and intellectualism that can sound rehearsed, isn't for everyone, but there's no doubt that Konitz has, and continues to be, an inspiration to many. Four Classic Albums collects some of Konitz's lesser-known work from the 1950s—not his best, but still exciting dates that show an artistic vision that few could match.

An Image from 1958 is a daring third stream work that pairs Konitz with a string section led by Bill Russo, an arranger from the Stan Kenton days. No-one should expect a standard sax 'n' strings record from Konitz, and the fairly tame opener "'Round Midnight" does not adequately set up the unusual compositions that follow. An Image is dominated by two longer pieces: "Music for Alto and Strings" and "An Image of Man" titles which point to the lofty aspirations of all involved; we're a far cry from "Body and Soul" here. Russo's original compositions are filled with dissonant, jarring chords that never seem to resolve, yet somehow Konitz is able to find an improvisational footing among the dissonance. Much of what transpires indicates what a blending of jazz and classical could become, but the album is at times a challenging listen, one made with equal shares of moxie and pretention.

You and Lee from 1958 is a fine post big band era record with charts by veteran West Coaster Jimmy Giuffre. It's by and large a fairly straightforward, cool swinging session with two surprises: one, that two oddballs like Giuffre and Konitz turned out a record that was so conventional; and two, that "Konitz" and "swing" could conceivably be used in the same sentence. But swing it does, in a traditional West Coast fashion—light, breezy swing expertly arranged by Giuffre and deftly approached by Konitz, who navigates the charts with detached precision. While the charts are Californian in nature, the bandstand is comprised of a bunch of East Coasters like Bill Evans on piano, Jim Hall on guitar, Bob Brookmeyer and Billy Byers on trombones—that make this something special.

The two live quartet recordings that finish out the collection are good, but not great. All were recorded in Boston in 1954 and 1955 and feature Konitz backed by Ronnie Ball on piano and a variety of bassists and drummers that are eager to explore what the altoist is up to. Konitz was just coming off an influential stint with Lennie Tristano and was finding his footing as a leader. The setlist is made up of standards and blowers based on standards, and the liveliest tunes are originals like "No Splice" and "Ablution" in which Ball and Konitz play the convoluted heads as a duo. However, Ball drags down the group with clunky comping; the block chords sound terrible and the tunes where Konitz solos without piano are refreshingly free and a hint of the outstanding records Konitz will make later on.