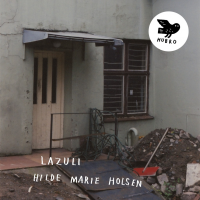 In May 2015, Norwegian trumpeter and soundscaper Hilde Marie Holsen released her debut recording, Ask, on the Hubro label, to glowing reviews, including an All About Jazz piece that described her as "a natural heir of masters such as Nils Petter Molvaer and Arve Henriksen." While that may seem quite a weight to put on the shoulders of a young player with only one album release to her name, Holsen's music on Ask fully justified it. And three years on from that debut came the follow-up, Lazuli.

Curiously, Ask has usually been described as a mini-album, because of its five tracks and thirty-six-minute running time, but Lazuli attracts no such description despite having one track fewer and running for two minutes less than its predecessor. One listen to Lazuli's thirty-four minutes immediately makes it clear why it is no mini-album; its four tracks together form an integrated suite, inspired by visual art and titled after minerals used to colour paint, with the music binding the four together in a satisfyingly coherent, fully-realised whole. Starting life as improvisations, everything on the album was played by Holsen herself and is a combination of acoustic trumpet, electronics and other sounds which complement each other ideally.

Holsen's uncomplicated, melodic trumpet makes it evident why she has drawn comparisons with such greats as Henriksen, Molvaer and Jon Hassell. Her playing is unhurried and spacious, with a first-rate recording allowing the mellow richness of each note to be fully savoured. The simple beauty of the trumpet contrasts with the soundscapes that Holsen creates to surround it. Built up layer by layer, they are deep, dark and dense, often being underpinned by an ominous low-frequency rumble; not looped, the soundscapes are constantly shifting like kaleidoscope patterns, with sounds bubbling to the surface and fading away just as quickly. Importantly, they are soundscapes, not accompaniment, and are designed to frame the trumpet, which they do perfectly.

The end result is music that is uniquely individual and highly distinctive. Forget any comparisons, Holsen is without parallel. Even more so than Ask did, Lazuli signals the arrival of a bright new star.