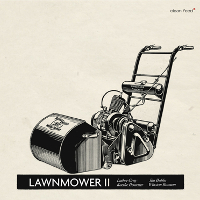 Drummer Luther Gray described in the liner notes to West, Lawnmower's 2010 Clean Feed debut, that the record was an attempt to reconcile the various genres he'd worked in throughout his career—an all-inclusive approach that could be traced back to the stylistically diverse music he listened to on a Walkman while mowing lawns in his youth. Lawnmower II, the quartet's sophomore effort, reinforces Gray's initial inspiration, conjuring aural impressions of the lazy, hazy days of summer.

Like West, which traversed the panoramic expanses of Americana, this session exudes a similarly cohesive ambience. Assertive detours, like "Cartoon" and "Tiny Wings," are exceptions, although even the latter's skittering rhythms are offset by languid glissandos from Hobbs and Hostetter. The program's prevailing mood is one of probing, groove-laden introspection; "Good Beat" channels mid-tempo Afrobeat, while "Walk In The Park" subtly references a strolling blues, but it's the twelve minute "Space Goat" that best illustrates the date's charms. Anchored by a hypnotic ostinato and Gray's loping backbeat, Hostetter's wah-wah laced violin weaves psychedelic variations in harmony with Hobbs' vocalized alto refrains, while Braman's fuzz-toned bass provides an electrifying undercurrent.

Despite the change in lineup, the group continues to evince the same sort of rich conversational interplay that defined the ensemble's first album, imbuing Lawnmower II with an adventurous sensibility that transcends the limitations of genre or style.