By NENAD GEORGIEVSKI
March 27, 2021
Sign in to view read count 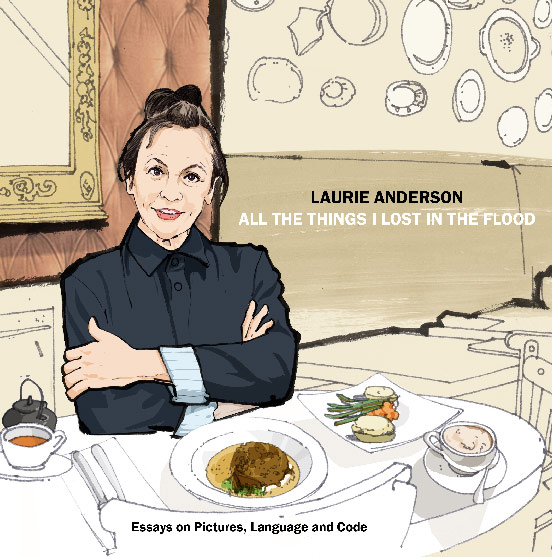 The story of performance artist and cultural icon Laurie Anderson's book All The Things I Lost In The Flood started in 2012 when Hurricane Sandy (the third costliest storm in U.S. history) hit New York. After the storm passed, Anderson went to the basement—where she kept her equipment, props, papers, books, and archives from her illustrious and brilliant career—only to find that everything was destroyed by flooding. This initially had a horrendous effect on her. While looking through the inventory, she had an epiphany that prompted her to glance back at her career and achievements. This story is actually at the heart of two consequential works by Anderson: the magnificent collaboration with the Kronos Quartet titled Landfall, the core idea of which is a rumination on how we handle loss, and this book, a journey in images and words into Anderson's creative world that assesses her prolific output.

Laurie Anderson is not someone who can be easily pigeonholed or defined. An impactful and significant influence in the art and music worlds, she is known for her diverse and unique portfolio. Her work's constant evolution has proven her ability to diversify her art and seek out the unknown throughout her career. She is often referred to as a "performance artist," a nebulous and vague term that doesn't describe all of the details and roles she undertakes when creating her work. It's a catchall term coined in the '70s to describe the multimedia events of avant-garde artists such as John Cage, Robert Moran, and Meredith Monk. These days, the more usual term is "polymath."

Apart from being a performance artist, Anderson is a composer, musician, dancer, painter, sculptor, installation artist, writer, software designer, and film director. But above all, she is a storyteller who uses all kinds of artistic mediums to enhance her work. She easily blurs the boundaries between different areas, between what is real and what is not, for the purpose of seeing what else can be called music or art.

Consisting of eight chapters, this book provides a non-chronological narrative of her oeuvre. It's an invitation into the creative process's innermost core and paves the way for an entirely new and intimate meeting with the artist. Each chapter sheds new light on the complexity of Anderson's processes and the range of disparate materials that can trigger her creativity. It features an enormous collection of photographs, artwork, set designs, personal artifacts, film stills, scripts, and song lyrics along with detailed essays, comments, and meditations that provide a detailed outlook on the different themes within her multi-faceted creativity.

Through these stories, Anderson also talks about the successes and failures behind many of her projects. She details works ranging from the overtly political installation and performance piece Habeas Corpus, which examined the story of the youngest detainee at Guantanamo Bay; her album Homeland (Nonesuch/Elektra, 2010); the eight-hour, four-part multimedia opera United States; the documentary film Home of the Brave; and the electronic opera Songs and Stories from Moby Dick. But she doesn't just spend time on present-day projects. Anderson goes deep into the past about installations and artwork done in the '70s. There is a feast of stories and ideas from every chapter of her life. She even details the works of literature that have inspired some of her work, such as the Tibetan Book of the Dead, Moby Dick, Crime and Punishment, or William S. Burroughs's works.

Anderson is a wonderful storyteller who imbues her tales with unusual humor and burning intelligence that provide a deeper understanding of the human condition. Her work has always been original and idiosyncratic. She has the rare ability to combine art and entertainment without any trace of pretension. Her works may be "serious music or installation," but they don't take themselves seriously, and they're fun without being trivial. In a way, her stories and performances open people's perceptions about everything: societies, human characters, and complex social interactions. This book will probably be the closest thing to an autobiography from her.

All The things I Lost In The Flood is a labyrinthine journey through this polymath's life and creative career. Over 40 years of work are compiled into an impressive portfolio, and Laurie Anderson's renown is undeniable. This book takes a deep dive into her oeuvre's complexities and illuminates her creative process and interests in technology and storytelling. It is an immersive, sensual, and energizing experience. Above all, it's a great portrayal of a multifarious artist whose works have been simultaneously engaging, entertaining, and challenging.