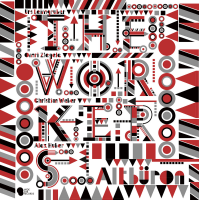 Altbüron is the first album release from The Workers, a newly-formed quartet of experienced Swiss improvisers, each of whom had previously collaborated with at least one other member; the quartet comprises soprano saxophonist Urs Leimgruber (born 1952), alto saxophonist, flautist and voice Omri Ziegele (born 1959), bassist Christian Weber (born 1972) and drummer Alex Huber (born 1982), those dates illustrating the range of ages—and, hence, influences— within the group. This album was recorded live at bau 4 in Altbüron, in October 2019. In addition to his fine work at the drums, Huber recorded, mixed, mastered and produced the album; he did a good job on all counts as each player's contributions can be heard clearly throughout.

The music is credited to all four players and has the hallmarks of free improv. The sole forty-three-minute track, which shares its title with the album itself, documents an entire set during which each player gets plenty of opportunities to show what they can do, and do whatever they please. Inevitably, given the line-up, the saxophones tend to predominate, ably supported by the bass and drums which go way beyond the role of a conventional rhythm section; both Weber and Huber find plenty of space in which to demonstrate their formidable skills, solo or in tandem, without ever losing sight of their key support role.

That is fortunate as Leimgruber and Ziegele take obvious delight in roaming free and feeding off one another, with ideas and responses being batted back and forth between them, sometimes with thrillingly anarchic results. Occasionally, the music is punctuated by short vocal interjections from Ziegele which sound very '60s, taking the form of recitations or blank verse, in each case very well framed by drums and bass in particular.

Given that this is the first recording of a new group, it is rather too early to unduly praise or damn them; suffice to say that Altbüron contains more than enough fine music to suggest The Workers will be a group to watch out for. Although the quartet does have rough edges, they do not need to be smoothed down, as they are a key part of the group's appeal. In a nutshell, The Workers work...