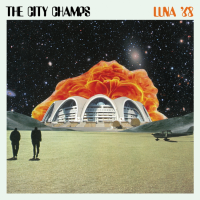 The instrumental trio of guitarist Joe Restivo, organist Al Gamble and drummer George Sluppick first came together as the City Champs in 2007. After the release of The Safecracker (Electraphonic Recordings, 2009) and The Set-Up (Electraphonic Recordings, 2010), the three musicians were then drawn in different directions; Restivo, a member of the The Bo-Keys, supported artists such as Don Bryant and Percy Wiggins, while Gamble joined St. Paul & The Broken Bones and Sluppick performed with JJ Grey & Mofro as well as the The Chris Robinson Brotherhood.

Reunited in the studio, to record together for the first time in over a decade, the band enlisted Bruce Watson to produce Luna '68 in his Delta Sonic Sound studio in Memphis. And, while it is most appropriate homage to refer to the City Champs as an organ trio, it is also a disservice of sorts. To be completely fair, via tracks like "A-Meld- A-Marcos," Restivo, Gamble and Sluppick transcend easy labels altogether by invoking the spirit and style of jazz icon Jimmy Smith, Booker T & the MG's and other vaunted purveyors of earthy soul-jazz including Brian Auger.

Still, the complimentary adjective 'tasty" applies here as fully as it does on Restivo's own Where's Joe? (Blue Barrel, 2019). Yet, on the very first number here, the title tune, the guitarist and his compatriots elevate their performance to a grand, near-majestic plateau. Then, on "Lockdown City," the Champs begin to morph into a pseudo-surf band, except that Gamble's organ lines wash away any kitsch that emanates from the guitar as Restivo twangs away with gleeful relish. Meanwhile, Sluppick is as unobtrusive as he is insistent on the very next cut, the R&B-rooted "Mack Lean."

There, the syncopated rhythm guitar figures Restivo quickly strums are also most effective in setting up the languorous mood he and his bandmates conjure up during "Hanzo." And in yet another delicious contrast, some decidedly heavy organ erupts on "Freddie King For Now," prompting further rumination on the roots of the City Champs; as the mysterious mood of "Voyage to Vega (For Felix)" unfolds, those influences would appear to include, perhaps not surprisingly, those noted British eclectics Traffic.

Of course, such passages also compel questions about how the band comes up with song titles such as "Skinny Mic." But, the generally lighthearted tone of those designations mirrors the essentially easygoing air of the music throughout Luna '68. Accordingly, quieter moments dovetail quite nicely with those of outright gaiety as they appear on "Thinking of You"; the tenderness of emotion arrives on a leisurely tempo that only makes it more inviting. As accessible as that cut is, its description as 'ingratiating' could be just as readily applied to the other eight selections of what is bound to be a deceptively durable album.