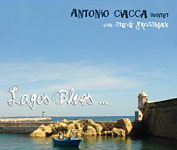 Four decades ago, Miles Davis called then-burgeoning saxophonist Steve Grossman "an important voice in this music." One of the people who heard that voice was pianist Antonio Ciacca. Lagos Blues, Ciacca's second disc for Motema, not only shows Grossman's influence as Ciacca's former teacher; it also includes the now-legendary tenor player's direct influence, as he joins Ciacca's regular quartet for the date.

Ciacca says Grossman once compared his former student's writing style to Horace Silver and Benny Golson. That assertion is proven out immediately on the title track—a driving blues that wouldn't have sounded out-of-place coming from the Silver Quartet or Art Blakey's Jazz Messengers. Grossman and fellow saxophonist Stacy Dillard harmonize on the melody line over Ciacca's fills, while bassist Kengo Nakamura and drummer Ulysses Owens serve up an Old School bebop foundation. The rhythm section pumps it up as Ciacca plays a superb right-hand solo, his left hand comping with unfaltering aplomb. Owens kicks it up another notch as the front line returns for the head, capping a seriously vibrant opener.

That sense of Silver runs all through Lagos, as Ciacca alternates between his own compositions, a few standards, and some Grossman classics. Even without Ciacca's fulsome liner notes, his affection for Grossman as an artist and a mentor comes shining through when he tackles Grossman's 16-bar blues "Take the D Train." The piece is trad as a single-breasted suit, but Ciacca's attack is so alive that the result would appeal to any type of jazz fan. Grossman's influence as an educator comes through on "Nico's Song," a re-write of "All the Things You Are" that Ciacca dedicates to his son.

Grossman and Dillard both play tenor sax, and that can be a problem, as it can cause overlap on the front line. While both players do their work with equal passion, there are enough subtle differences to help with differentiation. It would have helped matters if Ciacca had included a breakdown of the solo order in his liner notes. That said, the quality of the front line is undeniable, whether they're playing hot individual solos on Ciacca's hopped-up re-boot of "Body & Soul," or tossing the solo spot back and forth on a sensual version of Paul Chambers' "Whims of Chambers." The latter tune gives Nakamura the chance to get lyrical, and he takes full advantage of the opportunity.

Above all, Lagos is Ciacca's way of thanking his own luck for the chance he got in 2005 to teach at the Lagos Jazz Summer Camp. Lagos is a town on the coast of Portugal; Ciacca considers teaching jazz in that place—to "a class of young and old, talented and less talented"—to be a truly great gift. As a result, Lagos Blues is either "giving back" or "paying it forward." Either way, it's still magic, and having Grossman along for the ride is the cherry on top of a very tasty dish.